Tuesday, February 23, 2016 -- Gasoline Demand To Set New Records? It Could Be Close; It May Depend On How Many Teslas Are Delivered


“Based on estimates in the most recent Short-Term Energy Outlook, vehicle travel in the United States in 2015 was almost 4% above its 2007 level, but motor gasoline consumption has not exceeded its previous peak in 2007.

Improvements in light-duty vehicle fuel economy are largely responsible for this outcome. STEO forecasts motor gasoline consumption to average 9.23 million barrels per day (b/d) in both 2016 and 2017, about 0.6% below its 2007 level. In contrast, vehicle travel is expected to grow to levels 5% and 7% above the 2007 level in 2016 and 2017, respectively.”---EIA

Starting in November, 2005, and through August, 2007, the amount of gasoline delivered in the US exceeded the comparable month, one year earlier. For the first eight months of 2007 US gasoline demand hit all-time records that have not been beat since (same month comparisons). But it's been close. 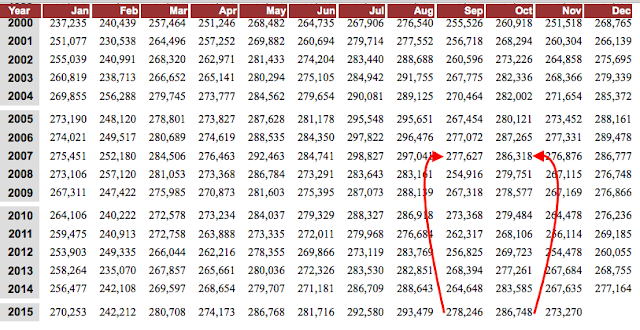 I find the numbers staggering. I find the data most interesting.

In 2015, two things to note: a) gasoline was incredibly inexpensive, but it was getting less expensive as the year went on; and, b) the US economy had slowed significantly.

Gasoline demand started off very slowly in 2016 but has now picked up. The EIA estimates the average consumption to be 0.6% below its 2007 level. If the economy picks up, and gasoline remains this inexpensive, I wouldn't be surprised to see gasoline consumption to go up.

But considering all the mileage improvements and CAFE standards and all the hybrids and all the EVs and all the Teslas on the road, it's amazing that gasoline consumption continues to increase after all these years.

Note: I may have mis-read the spreadsheet, but I spent a few minutes looking for errors I may have made. Regardless, in notes like this, typographical and factual errors are likely. If this information is important to you, go to the source.
Posted by Bruce Oksol at 1:11 PM