The agreement gives ENB easements for six existing oil pipelines through 2039; the company plans to build the new pipeline in an expanded right of way adjacent to existing pipelines on the reservation.

Line 3: Chippewas are working with Enbridge to get this done --


The Fond du Lac Band of Lake Superior Chippewa said they are willing to allow Enbridge Energy to route the new Line 3 oil pipeline through the reservation. 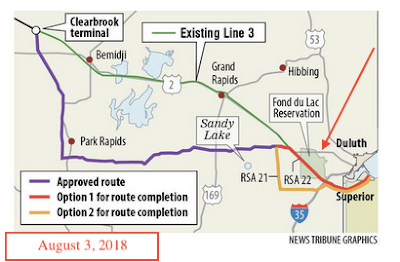 
Enbridge Energy and the Fond du Lac Band of Lake Superior Chippewa have reached an agreement to build the Line 3 replacement oil pipeline through the band's reservation near Cloquet in northeast Minnesota.

The financial terms of the deal are confidential. But the agreement provides Enbridge with easements through 2039 for the six existing oil pipelines that cross the reservation. The easements were scheduled to expire in 2029.

Enbridge will construct the new pipeline in an expanded right-of-way next to the existing pipeline corridor. The Calgary-based company will also remove the old pipeline from the reservation after the new line is built and in service.

Enbridge up 19 cents, about half a percent in early morning trading, September 4, 2018, first full trading day after announcement.

By the way, a reader provided this "flashback": 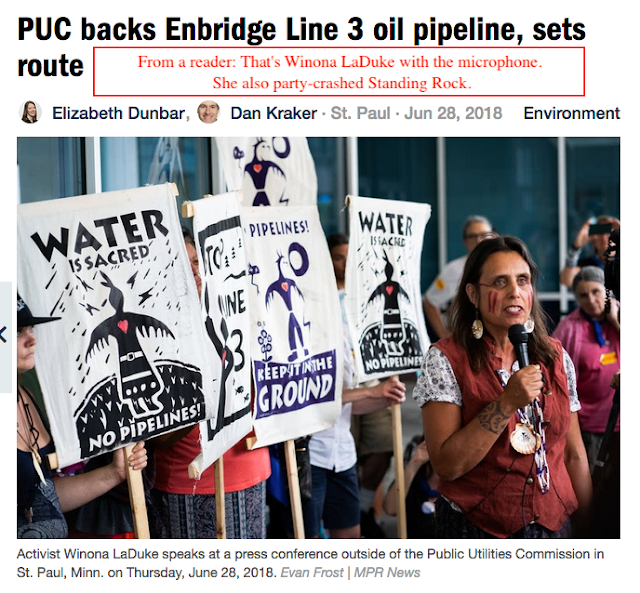 "LaDuke" is a Chippewa word that loosely translates to "show me the money." Some folks have wondered whether Ms Winona is a native American, but her high cheekbones -- at least according to Pocahontas, Democratic Senator, Massachusetts -- suggest that she is.
Posted by Bruce Oksol at 9:50 AM