Saudi Arabia, whose economy has taken a beating in recent months thanks to the crash in oil prices, just got another terrible piece of news.

On Monday, HSBC economists Simon Williams and Razan Nasser dropped a note on the country's foreign-exchange holdings, and things look pretty dire for the oil-reliant nation.

It shows that FX reserves dropped by more than $14 billion (£10.1 billion) in January, falling to their lowest level in nearly three years.

The amount of reserve assets held by the Saudi government now stands at $602 billion (£434.5 billion), nearly $150 billion (£108.3 billion) down from its recent peak in late 2014, just before oil prices started plummeting. 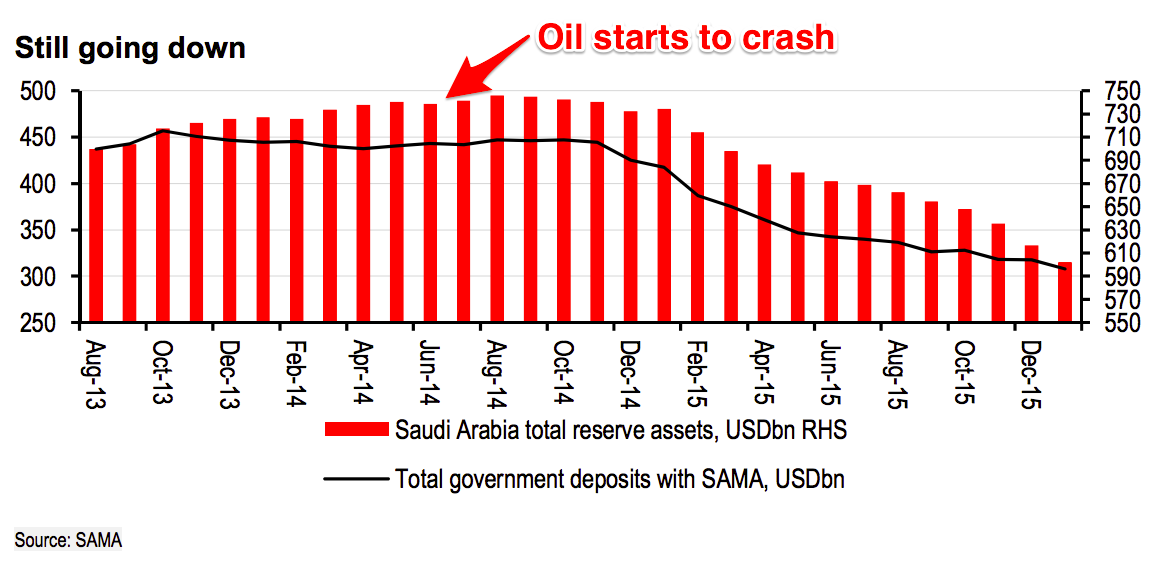 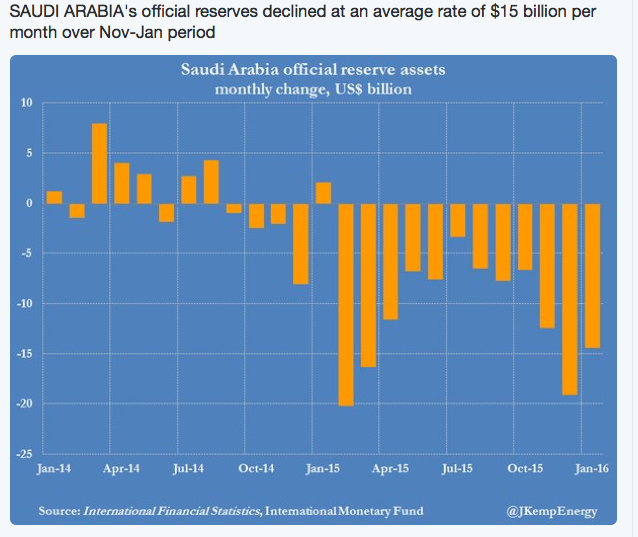 Why Saudi Arabia can't control the oil supply any more. Link here. This was taken directly from Mauldin's Economics.
What this means for Saudi Arabia:


Even with a 25% budget cut, Saudi Arabia would have just three to five years of reserves and borrowing available at $30 oil. We note that several respected investment banks are projecting that oil will fall to $20 this year. [Old news; not gonna happen.]

If a crisis in Europe or China were to even slightly reduce global demand, $20 oil seems a very real possibility.

I can't make this stuff up. The Peak Oil blog is still up. I don't know if the linked story is even worth reading, but just the fact that Peak Oil is still up and running is beyond the pale.


Heavyweight oil producer group OPEC stepped into the ring with young upstart US shale back in November 2014 and delivered its best shot.

Led by prizefighter Saudi Arabia, it decided not to cut output in hopes of arresting the slide in prices, but, in an attempt to floor the relatively high-cost producer, declared it would defend its ground.

Fast forward 13 months and unconventional crude supply is down but not out. And OPEC, whose membership has been split down the middle by a policy aimed at clawing back market share from what has proved to be a resilient opponent, must be wondering whether it has all been worth it — especially after having read the International Energy Agency’s latest medium-term forecasts.

Indeed, OPEC is now in a predicament of its own making. It and Saudi Arabia have regularly stipulated over the past 13 months that OPEC will not cut output unilaterally but is willing to work with independent producers towards a stable market. But no one has shown willing to cut production and the talk now is of an output freeze, as proposed by non-OPEC Russia, Saudi Arabia and two other OPEC members, Venezuela and Qatar.