Gasoline: in the local area (north Texas; DFW area; residential service stations), I see unleaded regular gasoline is going for $2.43 / gallon. It may be slightly less expensive down the street. I may see later this evening when I take Arianna to water polo. By the way, her team won both games in yesterday's "one-day tournament." They won decisively and Arianna scored two goals.

Energy merger: Right in my back yard. A Plano company -- just down the road from us -- will buy Houston upstream company for $1.7 billion.  Denbury Resources will acquire Penn Virginia Corp, an upstream company focused on the Eagle Ford shale. Denbury's presentation is available to review. It won't be there "forever." $1.7 billion / 84,060 net acres = $20,000 / Eagle Ford acre. 2Q18 Penn Virginia (PVAC) presentation at this link.To a reader I noted in a "not-ready-for-prime-time e-mail: 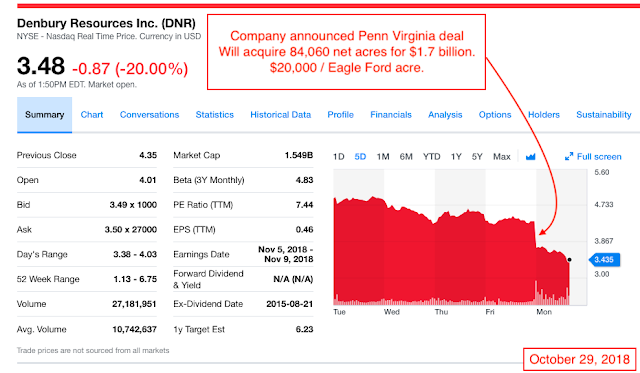 Wells coming off confidential list over the weekend, Monday:


RBN Energy: this may become an even bigger issue if Prop 112 / Colorado passes -- Niobrara crude production growth and takeaway pipelines.


Crude oil production in the Niobrara region in northeastern Colorado and eastern Wyoming has quadrupled since the start of the 2010s, and now tops 600 Mb/d. Fortunately for producers in the Niobrara’s Denver-Julesburg (D-J) Basin and Powder River Basin (PRB), midstream companies not only developed enough new pipeline takeaway capacity to transport all those incremental barrels, they overbuilt. As a result, the region — unlike the Permian and Western Canada — currently has no crude-oil pipeline constraints, something that makes the Niobrara even more attractive to producers.

But part of a pipeline system now moving crude out of the D-J is being repurposed to carry NGLs instead, and with D-J and PRB crude production still rising, you’ve got to wonder, is a takeaway shortfall on the horizon? Today, we continue our series on the Rockies’ premier hydrocarbon production area and the infrastructure needed to serve it, this time focusing on crude oil.

Previously we said that crude production in the D-J Basin and PRB took off during the Shale Era, soaring from less than 140 Mb/d in January 2010 to a peak of nearly 500 Mb/d in April 2015. With the 2014-15 oil price crash, though, drilling activity in the D-J Basin and PRB declined and Niobrara crude production sagged — much like it did just about everywhere else in the U.S. (except the Permian). By January 2017, the play’s oil output was down 19% from its apex, at just above 400 Mb/d. Since then, though, it’s been on a tear — up to 620 Mb/d as of October (a 54% gain since the beginning of last year.

Wow, I'm haunted by "Moon River." Have been for several days now; not sure how it started. Can't get it out of my mind.

I'm trying to figure it out. Like the narrator in Zen and the Art of Motorcycle Maintenance trying to re-discover/understand Phaedrus.

The song was originally performed by Audrey Hepburn in 1961. I would have been ten years old. I know I would not have seen the movie; I'm sure I never heard her version until later in life. Until early adulthood I only associated "Moon River" with Andy Williams, 1962 - 1963. I'm happy to see Audry's version has 14 million hits on YouTube; Andy Williams with 12 million hits. I've always considered "covers" karaoke. Rarely are "covers" better than the original. The same is true with this one.

We had a "hi-fi" stereo in our home on 17th Street in Williston. It was hidden in a nice wooden console. It would have been an expensive purchase for my parents. To the best of my memory, it was never played -- or very, very seldom played. I don't recall any albums, but I suppose there were some. The living room was pretty much off-limits to the family. We spent out family time in the family room, an addition to the original house. It was a beautiful room, and an incredibly functional room. Mom insisted on a sink in the corner just next to the entrance into the kitchen. With six children she needed extra sinks where they could wash their hands before coming to dinner. Has that ritual disappeared?

Back to the "hi-fi." Rarely I recall Mom would turn on its radio -- but maybe I'm just recalling something that never happened. I do vaguely recall a small radio in the kitchen.

I've never read Breakfast at Tiffaney's. I can't imagine reading it now, but ...
Posted by Bruce Oksol at 6:13 AM