We may have DUCs in North Dakota, but California has a "Duck Curve," as reported by BloombergBusiness.

This is the "Duck Curve": 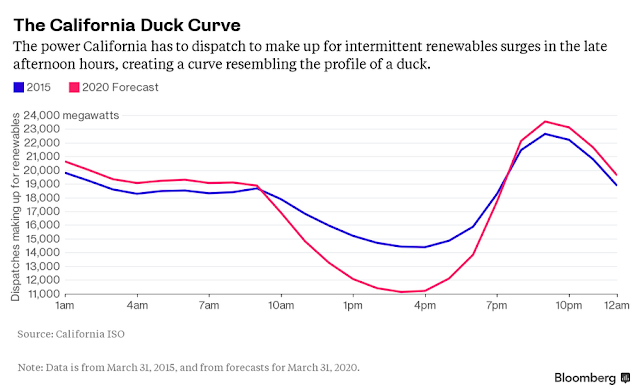 
When the sun starts to set in California, there’s one thing you can count on: thousands of megawatts of natural gas-fired power plants quickly firing up to keep the state lit.

It’s a daily phenomenon that will become more pronounced than ever this winter as California’s ambitious clean energy goals have boosted the state’s use of renewables. The surge in intermittent solar power will test the statewide electricity grid because it exacerbates the need for alternative sources such as gas outside of daylight hours. Regulators have warned it’ll make California more vulnerable to price spikes and power disruptions.

It works like this: As the day begins to wane in the Golden State, generation from solar panels drops off. That occurs just when consumers returning home from work turn on appliances and flip on lights, driving up electricity consumption. Other power supplies are needed to fill the gap and the need is more urgent in winter when days are shorter.

The phenomenon known as the “duck curve” is so named for the resemblance of the demand slope to the profile of a water fowl. The California grid’s need to call on gas-fired plants to balance shifts in demand and supply shows the potential hazards of tying more renewable generation to power networks.

My hunch: we'll see some days when glitches in computer software upgrades lead to some interesting blackouts. Blackouts, not brownouts.
Posted by Bruce Oksol at 6:28 AM