Notes From All Over -- The Early, Early Morning Edition

Hypocrisy: when one is a multi-billionaire, it is easy to shout "lock down." 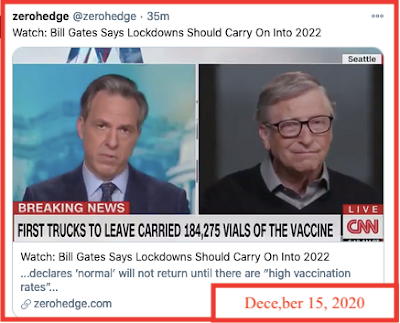 Tea leaves: GOP loses Georgia. One data point to follow to make that prediction. This is not rocket science.

Retailer of the decade: without question, my vote goes to Target.

Oil is dead. Long live oil. Did anyone see this coming?

Tea leaves: US investors are gonna love Joe Biden. And before it's all over, they're gonna love the environmentalists. See next story.

Natural gas: natural gas, propane are early winners in quest for clean ship fuels. Who saw this coming? From The WSJ: roughly a quarter of all shipping capacity on order is being built to burn new fuels as operators seek a future with reduced emissions. I remember all the hand-wringing when the new rules were published. LOL. One big win for investors. Apparently ocean-going tanker aren't switching to wind power (sails) or solar energy (giant magnifying glasses to boil water):

Natural gas and propane are emerging as the leading choices for fuel sources to power vessels for shipping companies moving to slash carbon emissions in their operations.

More than a quarter of the ships on order in terms of tonnage are slated to run on liquefied natural gas or liquefied petroleum gas, commonly known as propane, according to an industry trade group, a clear signal of how operators are planning to meet mandates to meet clean-air standards.

The industry is mandated by global regulators to cut overall greenhouse-gas emissions by half in 2050 compared with 2008 levels, a target that has triggered a search by shipbuilders, ocean carriers, fuel providers and equipment makers for new types of engines and fuel sources to power vessels that handle global trade. Options under consideration include hydrogen, biofuels and electric power, along with LNG and LPG.

Here's where movers and shakers are headed. Florida. I hope this story is not behind a paywall. There is so much in this article; worth reading three or four times. If I had all the money in the world I would be doing the same thing, but in different locations.

Re-locations: at the sidebar at the right, "Themes-2020." From there, Re-locations: tracked here. Now add this story over at CNN: Elon Musk is leaving Silicon Valley for Texas. These millionaires and companies are following him.

Re-locations, continued. By the way, people were pouring out of US cities like LA and NYC well before the pandemic. Link here. There's an interesting graphic at the linked story. 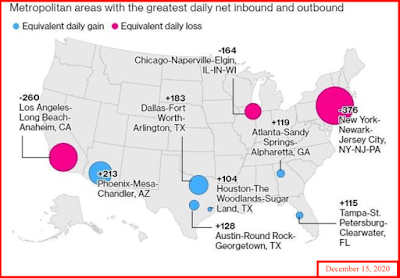 Bakken interest: there's nothing in either of these two articles that you don't already know, and if one of them is behind a paywall, you're not missing anything.

Why Warren Buffet is beting big on oil and gas pipeline companies. Link to David Messler. I could not care less about the story; anyone paying attention knows this. All I want to see: the names of the companies mentioned in the article. So, here goes: 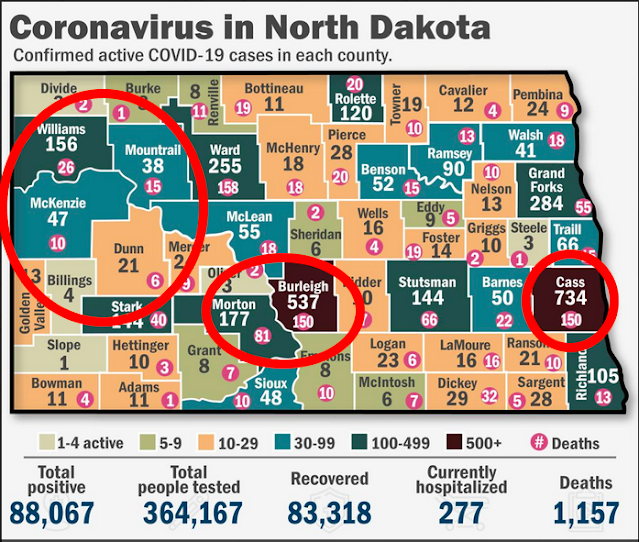 Johns Hopkins data: of the top five, ND drops to #5