February 5, 2020: a reader shared this information about these wells -- see comments:


These wells are There Forks B1 and middle Bakken. Other fields are doing 2560s. These wells are keeping the 1280-acre spacing. They will use two pads, 5 going north and 7 going south, based on blue prints. I think they might change some field orders to include more wells, 6 wells was based on 2012 designs. They are maxed out on my space but left the field only half developed. A field near by increased from 6 wells to 14 wells. I assume that they will do this as well. I also noted that they used the term "Three Forks B1." They never used the "B1" before. If I'm reading it correctly the length of the lateral is "LINER – LAT #1: 11,037 feet." 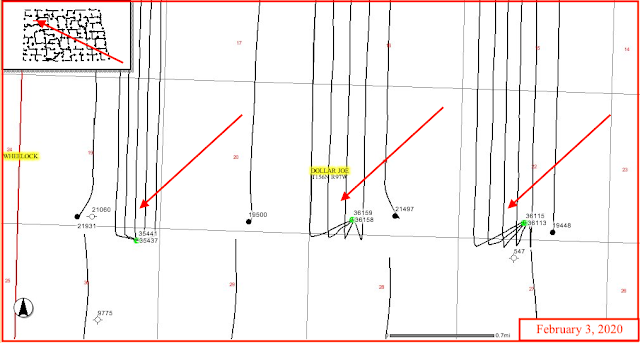 Anyone note the pattern here?

Anyone want to guess where the next five-well pad will be drilled?

For newbies: this is "classic Bakken."

Observations:
A reader seeing the graphic above made these comments:

That graphic was especially interesting.

The wells on leftmost pad look like the 'curve' is  south of the section line, which might indicate that the perforations start immediately as the lateral crosses (northerly) into the new section.

More rock would be accessed  this way, and, perhaps, at the toe also?

If the pooling/Unitization/Setback changes allow wells to closely approach the next section at the toe?

The numbers on the well files should show this as they always include the start/stop footage of the perforations.

I would not be surprised if those wells on that left most pads had longer lengths of perforated wellbore than the other two pads.

I no longer have the data accessible so I cannot check.

If my speculation is correct, these longer perforated laterals - emanating from both the heel and toe portions - could significantly boost production numbers.

The reader is exactly correct about the"longer perforated laterals" -- all things being equal, this will result in increased production.

But all is not equal: the newer wells will be fracked with new frack strategies (including more proppant).

In addition, because of the original wells, the geologists and roughnecks will be much more familiar with the peculiarities of the spacing unit.

I assume there is much more that could be written but that's enough for now.

By the way, the drilling unit with the horizontal with a permit number #19500 is likely to be drilled next, but as of yet, not even any permits have been issued for the drilling unit.
Posted by Bruce Oksol at 12:37 PM