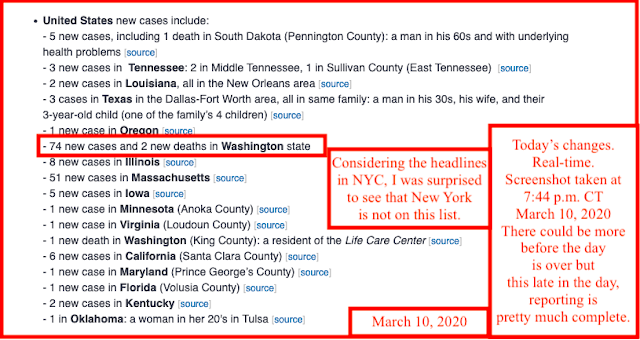 Regional issue: I don't want to get to far in front of my headlights but if we start to see data that Italy has a handle on this, one starts to get the feeling that even for the United States, it's becoming a "regional" and a state problem with less and less a national problem. Governors are stepping up and making the hard decisions. The Princess Diamond, in hindsight, may have given the experts at the CDC a chance to really, really better understand this virus. [Later, the Italian numbers reported today may be incorrect; apparently the Lombardy region not accurately counted. This makes sense; I had expected a higher number. I was wrong, thinking that things were better than they really were, and I got ahead of my headlights.]


7:38 p.m. March 10, 2020: the Italian numbers reported today may be incorrect; apparently the Lombardy region not accurately counted. This makes sense; I had expected a higher number. I was wrong, thinking that things were better than they really were, and I got ahead of my headlights. If accurate, the Italian numbers tomorrow, March 11, 2020, will be off the chart.

9:24 a.m. March 10, 2020: wow, this thing (coronoavirus) is already over. I stopped by Schwab this morning to deposit some cash, and then do some buying. While waiting I was forced to watch/listen to CNBC but talk about an upbeat feeling. Regardless of the ankle biters, the big story is that this is over. China is actually talking about getting back to normal and banning flights from the US. LOL. Right now, from the Chinese perspective, the US is doing worse than China with regard to the number of new cases. On top of that, the number of new cases will skyrocket as more testing kits become available. By country:
Cruise ships: a reader wrote me this morning to let me know that CBS had a segment on seven (?) cruise ships off the coast of Florida and folks were boarding. Speaks volumes. Look at the numbers from the best case study we have so far, the Diamond Princess:


Not surprisingly, cruise lines are loath to talk about people dying on their ships, but it happens. There are an estimated 200 passenger deaths a year – actually remarkably few given the 21.7 million people worldwide that cruise each year.

Italy: the numbers are out for the day. Best report we've had in several days. See note above. 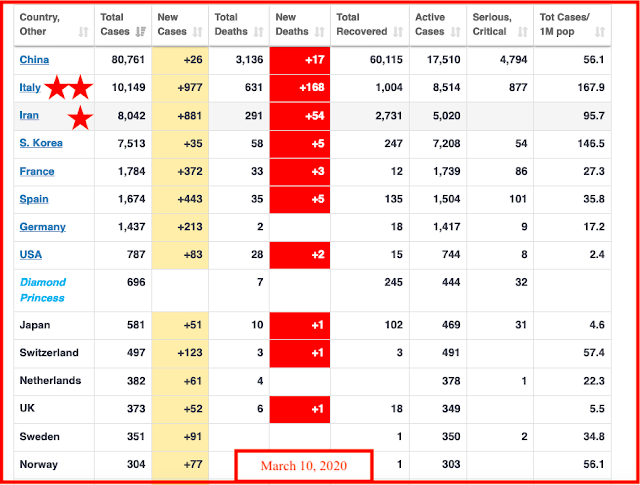