June 25, 2017: from The WSJ -- "How Four Brothers Survived the Gas Bust to Make Family a Billion: merger of Appalachian gas producer EQT Corp and Rice Energy will create one of the country's largest natural gas producers."


Eighteen months ago, the Rice family was pressured to sell shares in their family gas company at all-time-low prices as the natural gas market tanked. Now the Rice family is selling again. But this time, it is the entire company, and under much more favorable circumstances.

On Monday, rival Appalachian gas producer EQT Corp. EQT 8.00% said it would buy Rice Energy Inc. RICE 6.74% for $6.7 billion in a deal that is poised to deliver more than $1 billion to the family, whose members make up much of Rice’s management and control roughly 18% of the company’s shares, according to securities filings.

In late 2015, the warmest winter on record pulled down gas futures to all-time, inflation-adjusted lows, dragging down Rice’s stock. To avoid a margin call, the family sold a slug of shares they had borrowed against. Had they been able to hang on to those five million shares, the family would now be nearly $100 million richer.

Under terms of the EQT deal, Rice shareholders are due $5.30 in cash and about one-third of an EQT share. Based on EQT’s closing stock price the day before the deal was announced, that equates to about $27.05 for every Rice share.

Still, the family is likely one of the gas boom’s biggest winners just a decade after Daniel Rice III and his sons created the company from scratch. Their expertise in oil and coal helped them scout land in the early days of the shale-gas boom in Pennsylvania.

Mr. Rice honed his expertise at BlackRock Inc., where he was a mutual-fund manager specializing in energy when his family started the gas company. One early move was a deal to drill in areas controlled by a coal company that Mr. Rice’s BlackRock fund invested in. 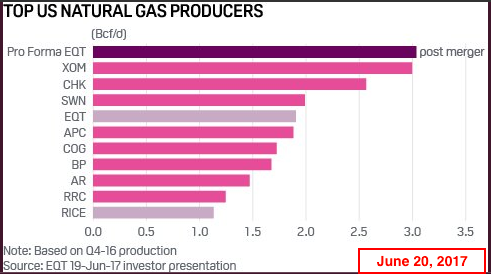