Later, 11:25 a.m. Central Time: see first comment. It appears the Center of Biological Diversity is suing the wrong president, but don't facts get in the way of fake news ...


The emperor penguin colony at Halley Bay was wiped out in 2016, and the warming that led to the ice melt started before that, so it appears that the Center for Biological Diversity is suing the wrong president...

Some of the big stories for the next six months:

Global warming, link here. This is really becoming quite a story. Again, as usual, the European- and Australian-deplorables are well ahead of the US deplorables in noting the pause in global warming, due to the solar minimums. Solar minimums (sunspots) -- fewer "hot" sunspots --> less heat to the earth --> less warming. It will be interesting how this affects hurricane season: relationship between solar variability and hurricanes. 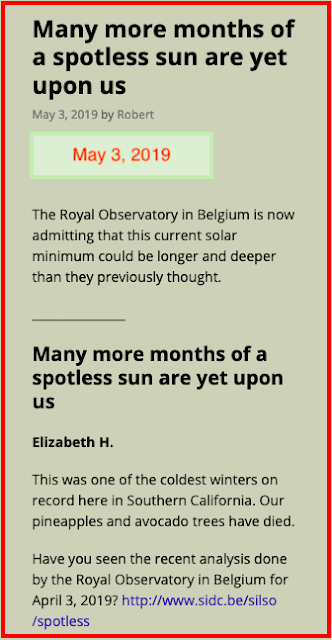 Belgium is now admitting that this current solar minimum could be longer and deeper than they previously thought. Spaceweather.com has been saying this for a long time now.

We are having more volcanic activity, an increased wobble of the earth, a continual polar shift, almost continual solar winds. and solar prominences which could lead to hyder flares.

We are not seeing increasing numbers of sunspots with the reversed magnetic polarity of the upcoming solar cycle 25. This means that many more months of a spotless sun are yet upon us.

Let's check up on four things: