Most Under-Rated Expansion / Bull Market In History -- May The Fourth Be With You -- Sorry!

Later, 4:02 p.m. Central Time: every time there's another article on the booming economy, I find another factoid that I had missed. In the most recent update, I had missed this one:


Unemployment has now been below 4% for more than a year, something the Obama administration didn’t even attempt to achieve.


They said it couldn’t be done. Well, Barack Obama did, anyway: “What magic wand do you have?” And of course we remember Paul Krugman’s infamous prediction that the stock market would never recover from Donald Trump’s election. But Trump’s formula of lower taxes, less regulation and–a key element, I think–sensible repatriation policy continue to drive our economy to unprecedented heights.

Unemployment has now been below 4% for more than a year, something the Obama administration didn’t even attempt to achieve.

And the stock markets continue to achieve record highs.

Despite every attempt to slow this train down, the Fed simply can't do it. This is the most under-rated expansion / bull market in history.

Those were not my words. A Schwab spokesman said that at an investment seminar two weeks ago here in Southlake, TX.

Barron's take: "this bull market has no expiration date." (Actually, it does, and we've discussed it before, but that's a story to be repeated at a later date.)


It's behind a pay wall, but the headline pretty much says it all. There was one data point that Barron's highlighted: work-force participation. United States participation rate is is stuck at 62 - 63$ -- for the past several years, and took a huge drop during/following the "Great Dpression" from which "employment/participation force" has not recovered.

The graphic (at the bottom) is striking, to say the least.

Prior to the last few years, one has to go all the way back to 1980 to see participation rates this low. One can argue that "things have changed" (technology, robots, etc) since 1980 but that argument doesn't hold when going back to 2005, only ten years ago -- unless technology is moving a lot faster than we think -- technology may be moving fast, but acceptance takes a bit longer. [How many folks reading this have a Roomba?]

WSJ: "jobless rate falls to lowest in nearly 50 years as employers ramp up hiring." Some data points:
Reminder:
Buffett: "no textbook could have predicted the strange economy we have today"
Athens: A Portrait of the City in Its Golden Age, Christian Meier, translated by Robert and Rita Kimber, c. 1998:


In the course of their log debates over strategy, the Athenians decided to consult the oracle of Delphi. The oracle advised the city to defend itself from behind a "wooden wall." Some citizens, especially the older ones, interpreted this to mean the Acropolis, which was surrounded by thornbushes. Others interpreted the "wooden wall" to mean the navy, and this opinion finally prevailed. The Athenians decided to evacuate their city and to fight the Persians at sea. 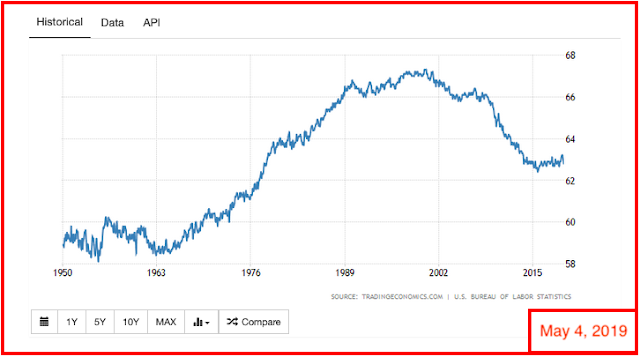 
The bull market becomes the longest in recent history Wednesday, by some measures, and strategists expect it to continue running for now, driven by a strong economy and solid earnings growth. Not all strategists agree how and when to measure the bull market’s run, but even so it has prompted a debate about what types of things could mean an end to the bull market — and one of the biggest is the Fed.

Regardless of varying definitions, it is pretty much a fact that as of July, 2019, all will agree this is the longest bull market in US history.
Posted by Bruce Oksol at 6:25 AM