Crude oil inventories: weekly API numbers -- a build of 2.903 million bbls. I didn't see what analysts had forecast, so I'm not sure what this build means. Probably not much. There was concern that stocks at Cushing were dropping too far, too fast, but this would seem to allay that fear. A build of 3 million bbls is fairly significant but doesn't mean much until we see the EIA data tomorrow. [After hours, after the data was released, WTI fells 9 cents, trading just below $72.] [I now see that analysts expected to see a draw of 1.279 million bbls.]

Two producing wells (DUCs) reported as completed:
One error on the daily activity report: the NDIC reports that Oasis renewed and canceled the same permit, #29919, an OM Erickson permit in Williams County 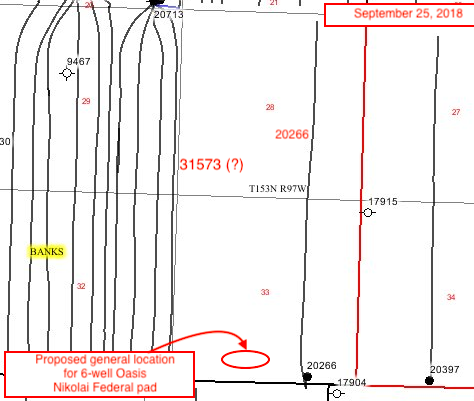