I attended the Bakken 2.0 opening session yesterday here in Fargo, ND; it was open to the public.

It was mostly a Bakken 101 session meant for the general public but as usual when people of that caliber speak there are always some worthwhile takeaways.

The president of CLR talked a bit about how important ESP's (electric submersable pumps) have become in the Bakken. ESPs can be controlled (speed/volume) from the surface. A problem with ESPs is they cannot withstand non liquids (sand). One wonders if this is a factor in the wild swings in well production. They may have to figure out how much oil they can pump without bringing sand along by trial and error; and, do that with each individual well.

Governor Burgum said we may be short of CO2 for future oil production. He did not mention the Allam cycle but I know that North Dakota is doing everything possible to get the first commercial plant located in our state. Seems almost a no-brainer--send gas out of our state on electrical power lines and keep the CO2 for enhanced oil production---all with no air pollution.

Sometimes the details are not important. What is important is what is discussed. If there is limited time and one thing mentioned is the Allam cycle, it's obvious there is a lot of discussion going on being closed doors.

We've talked about the Allam cycle on the blog previously; here's one post and another.

A huge "thank you" to the reader for passing this along.

It's a headline story; whether it's consequential or not, I do not know. Nor do I much care.


The past four years have been a 21st century low point for Western foreign investment in Russia, with sanctions, unlawful trade practices and ceaseless wars in the Greater Middle East antagonizing the sides even further. Against such a difficult background when virtually no Western major brave enough to enter the Russian market (and most American firms rolling back projects) it is doubly notable what Schlumberger is doing. In fact, Schlumberger seems to be, one might say finally, on the brink of concluding a milestone Russia deal, which would greatly fortify its standing as the world’s leading oil services company. By buying into Russia’s largest onshore drilling firm Eurasia Drilling Company (EDC), it could secure access to a massive market irrespective of political tensions. Well, almost irrespective.

The news that Schlumberger is allegedly keen on acquiring EDC first emerged in early 2015. Even then, several months after the introduction of a US-EU ban on any Western participation in Arctic, deep-water or shale projects, it raised eyebrows as an excessively ambitious undertaking. Schlumberger initially wanted to gain immediate and full control over EDC’s equity, then agreed to a first-round buy-out of 51% and in the end somewhat grudgingly acquiesced to offer $1.7 billion for 46% (because Russian authorities were concerned about the potential loss of an influential element of the nation’s oil sector) to be followed by a second-round acquisition three years later of the remaining 54%.

Confronted with massive bureaucratic pushback, Schlumberger renounced on the idea, pledging to look for M&A possibilities elsewhere… only to come around with a new offer two years later.

The fact that it is Schlumberger, not some other service major, that is buying Russia’s leading oil services company is by no means accidental. The co-owner of EDC, Alexander Dzhaparidze (neither he, nor the other owner Alexandr Putilov are under sanctions) has sold his first oil services-related company, the Iraq-focused Petroalliance, to Schlumberger in 2003.

Partially on the money generated by the sale, Dzhaparidze bought drilling assets then-owned by the private major LUKOIL, thus kick-starting the development of EDC. Since then, EDC and Schlumberger have forged a sort of a strategic alliance in 2011, with several cross-acquisition of each other’s Russian assets in the years leading up to the acquisition negotiations.

More at the linked article.

A long and tortured road to close this deal: 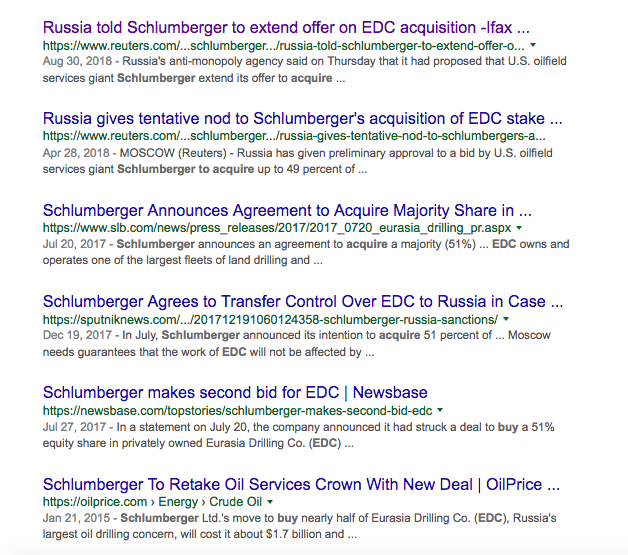