Number Of Active Rigs In North Dakota At Four-Year High; WTI Trending Down; Enerplus To Report A 50K Well -- December 13, 2018

Altruistic? The back story must be quite interesting. For those who have been under the Geico Rock for the past several months, Canada has curtailed heavy oil sands production because there is not enough takeaway capacity. Alberta seems to be trying everything to ameliorate the situation -- is "ameliorate" the best word I could have used? -- but I digress -- now this from S&P Global:


Enbridge's plan to swap 50,000 of North Dakota's Bakken barrels with Western Canadian barrels on its Mainline by mid-2019, after coming to an agreement with one of the shippers on the line, furthered strengthened Western Canadian crude prices. See WCS price at this post. WCS is currently trading for $26/bbl vs $52 for WTI. Wow.


The Michigan Legislature approved a bill Tuesday that would allow the replacement of a 65-year-old oil pipeline in a key Great Lakes waterway, voting to create a state authority that would oversee the construction of a tunnel to encase a new segment of pipe.

The measure — passed on 74-34 and 25-12 — would create the three-member Mackinac Straits Corridor Authority, which would be required to sign an agreement for the construction, maintenance and operation of the utility tunnel by Dec. 31 after Snyder appoints its members. The massive engineering project is expected to take seven to 10 years to complete, at a cost of $350 million to $500 million — which the company would pay. 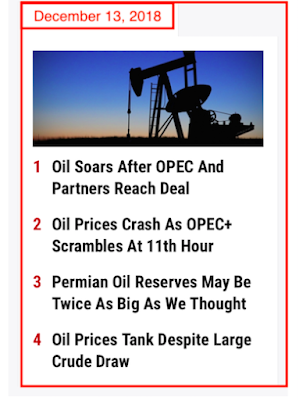 What fresh hell is this? Keystone XL pre-construction activities blocked by judge. And so it goes. At the link, a long line of cars running on gasoline taking workers out to plant "sacred corn."

That ship has sailed: for those with nothing better to do, if one wants to track the first shipment of LNG from Corpus Christie, here's the link to the site.


Mexico’s administration, led by new president Andres Manuel Lopez Obrador, has canceled two February bidding rounds, including one auction that would have been the first in Mexico’s history offering blocks targeting shale resources.

The release also stated that the CNH would be postponing seven farmouts with PEMEX.

Mexico’s president Lopez Obrador, who took office December 1, 2018, stated in July that he wanted to boost Mexico’s crude output to 2.5 million barrels per day. The veteran leftist also previously said that Mexican oil auctions would be suspended until contracts already awarded had been reviewed.

Will keep operating but Houston-based Parker Drilling Company has filed for Chapter 11 bankruptcy.

McDermott and BHGE join Australia gas project. A reminder that Australia is among the top two or three natural gas exporting nations, like, in the universe.


Located approximately 124 miles (200 kilometers) offshore Western Australia, the Equus Gas Project comprises 11 natural gas and condensate fields in the Carnarvon Basin, according to Western Gas’ website. The company, which acquired the project from Hess Corp, in November 2017, stated that the fields hold an independently certified resource of more than 2 trillion cubic feet (Tcf) of gas and 42 million barrels of condensate. Comment: 2 trillion cubic feet in context?

EOG declares dividend of 22 cents/share. This is unchanged from previous quarter. Prior to that, the dividend was 18.5 cents. The company must be doing just fine, thank you.

RBN Energy: could US natural gas stocks catch up this winter?


The U.S. natural gas market’s supply-demand balance in 2018 has been razor thin, with demand ramping up to match strong production gains. The result has been a large and stubborn storage deficit compared to prior years and price volatility, the likes of which the market hasn’t seen in a decade or more. How will the current storage level affect the winter gas market, and what are the prospects for storage to catch up before the winter is up? Today’s blog considers potential scenarios for the season-ending gas inventory balance.

After treading near $3/MMBtu nearly all year and daily settlements moving within just 10 cents day-to-day, the CME/NYMEX Henry Hub prompt natural gas futures contract last month began exhibiting wild volatility — the kind not seen in a decade or more. The December prompt contract settled in a wide range, starting the month near $3.20/MMBtu, catapulting up to $4.84/MMBtu and moving in 20 to 80-cent increments on many days. That volatility has continued into this month with the January prompt contract.

The cause of this newfound volatility is the market’s hypersensitivity to even the tiniest shifts in the weather outlook. That super sensitivity, in turn, stems from a combination of a tight supply-demand balance this year and a massive deficit in the storage inventory relative to recent years.

Total supply on average this year has trended nearly flat with total demand (not including storage), which implies the tightest supply-demand balance going back at least to 2010. That’s saying a lot, considering production has surged 8 Bcf/d year-on-year and continues to set records regularly. But gas demand has mounted a strong rally of its own this year and closed the gap with supply, and that’s depleted the storage inventory relative to prior years.