Fast And Furious -- January 27, 2016; US Crude Oil Stocks At Highest Inventory Level For Month Of December Since The Great Depression

January 31, 2016: someone over at The New York Times must be reading this blog. LOL.

Several interesting tweets one following the other, fast and furious:
Other energy tweets:
That last bullet was a bit interesting in view of this graph that shows gasoline demand continues to fall, though it now "parallels" last year's decline: 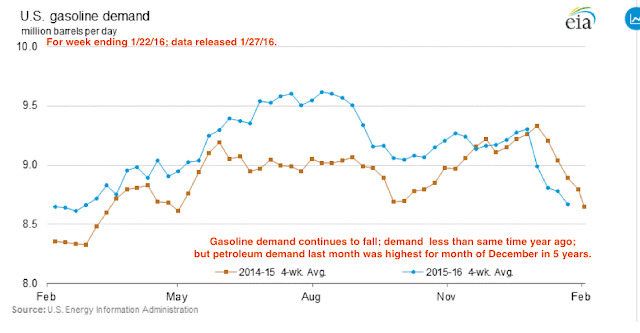 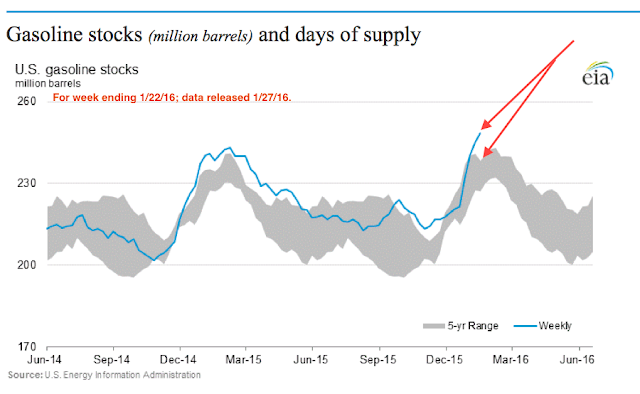 Tell me again why we're adding ethanol to gasoline? Oh, that's right. The first presidential "primary" is held in Iowa.

What peak oil? Did you notice that US crude oil stocks hit highest inventory level for month of December since 1930 -- wasn't that during the Great Depression?

California's snowpack --- S-N-O-W -- is deepest in five years -- Los Angeles Times. Link here. Kennedy clan is likely booking a flight out to the west coast now to confirm. And to go skiing.

Atlantic City: has been devastated by the quick collapse of its one-time monopoly on East Coast casino gambling and could see its cash flow run dry by April. The ravaged local economy laid bare the city's bloated budget and over dependence on a single industry.