Work continues on several major deep- and shallow-water crude oil production projects in the U.S. Gulf of Mexico (GOM), despite the fact that oil prices are far lower than they were when the commitments to develop these projects were made. U.S. benchmark West Texas Intermediate (WTI) crude for prompt delivery closed yesterday on the CME/NYMEX futures market at $26.55/Bbl – its lowest level since May 2003 – threatening to strangle resilient domestic onshore shale production. Yet GOM production levels will rise again this year--and likely for at least another couple of years—offsetting some of the expected decline in onshore U.S. crude output.  Today, we continue our examination of steadily rising crude output in the GOM with a look at projects coming online in 2016 and beyond.

Unemployment claims report: forecast for claims to be down 9,000 to 275,000.
Reporting today: tracked here.


Overall, Bank of New York reported a profit of $693 million, up from $233 million a year earlier. Per-share earnings rose to 57 cents from 18 cents. The year-earlier period included 53 cents in litigation and restructuring charges, partially offset by a tax benefit.

Excluding a previously disclosed charge stemming from a recent court decision, among other items, earnings per share increased to 68 cents from 58 cents. Revenue inched up 1.5% to $3.72 billion. Analysts predicted 64 cents in adjusted earnings per share on $3.75 billion in revenue. 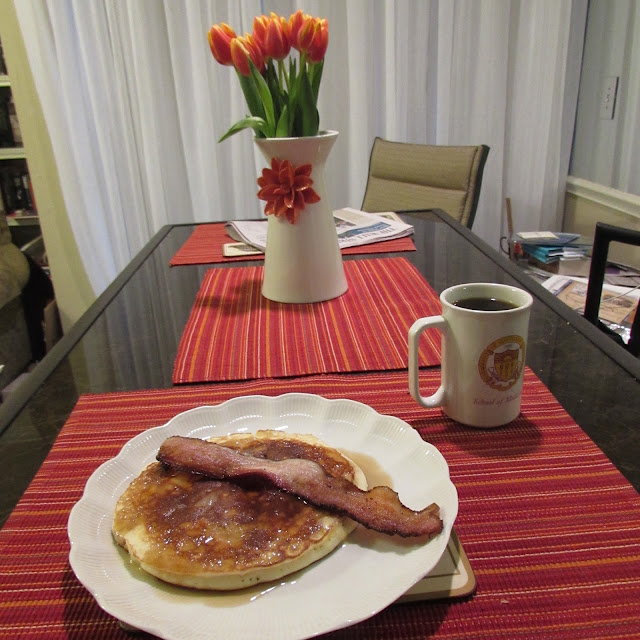 After working on this for the past month, I have finally "perfected" the pancake. LOL.
Posted by Bruce Oksol at 7:01 AM