First up, Apple: "human" edited news, not "robotic" news to be core of Apple.


This marks a distinction from rivals such as Facebook, which is crafting formulas that aim to deliver articles users want based on their Web habits, demographics and interests.

On deck: the US Open without Tiger. [Later, 9:20 p.m. CT: wow, what a finish. Jordan Spieth wins after a double bogey at 17 and Dustin Johnson 3-putts on #18. Dustin had a moderately difficult shot for eagle (and the outright win) on the 18th; went past, and then a moderately easy shot for par, pushing the tournament to an 18-hole playoff tomorrow; in fact, he misses, the moderately easy putt, and Jordan Spieth wins the first two majors of the year.]
In the dugout:  Greece, playing chess with Putin. Old news, being reprinted by the LA Times.


As Russia and Greece each endure strained relations with the rest of Europe, their leaders have been pondering how they might collaborate to sidestep their Western neighbors' sanctions and censure.

With his Balkan nation on the brink of economic collapse, Greek Prime Minister Alexis Tsipras on Friday paid his second visit in less than three months to Russian President Vladimir Putin to sign a lucrative pipeline construction deal and, presumably, to discuss what European Union member Greece might do to ensure that Russia receives relief from sanctions when current ones expire next month.

Up in the stands, reading the comics: 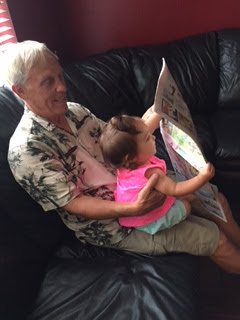 Back to the Greek story. I think this is the key right here. The AP reminds us:


One crunch date is June 30 (a week from this next Tuesday).

That's when Greece's bailout program expires and the last 7.2 billion euros ($8.1 billion) left in it will no longer be available.

It looks like it is coming down to a bidding war between Russia and Europe. There's no way Greece is going to let $8.1 billion slip through their fingers.

The next paragraph in that story:

On the same day, Greece has to pay the International Monetary Fund $1.8 billion and it doesn't have the money to do so. If it doesn't pay, it won't be immediately declared in default by ratings agencies. But the IMF also says it wouldn't be able to lend Greece new funds until the arrears are taken care of.

It was reported earlier that the Greeks have said they want the IMF out of Europe. This is the trial balloon / shot across the bow telling the IMF not to expect their $1.8 billion a week from this Tuesday.  But Greece will get that $8.1 billion -- either from Europe, or from Russia.

No one is going to leave $8.1 billion on the table.

Even for George Soros, $8.1 billion is still a lot of money.

[Note: Russia doesn't have $8.1 billion, but it will provide energy, pipelines, promises of good will in lieu of cash.]

Later, 8:31 p.m. CT: wow, talk about hitting the bull's eye. My comment that this has turned into a bidding war between Europe and Russia. This is the Drudge headline right now: Washington fears losing Greece to Moscow. Financial Times has the story:


Throughout the prolonged showdown between Greece and its creditors, the Obama administration has largely sat on the sidelines, issuing the occasional warning about the potential economic impact of a default.

But with Greece now on the verge of bankruptcy, the US is also beginning to worry about the political fallout from a deeper crisis and the potential for Russia to gain increased influence over a Nato member.

As Washington tries to maintain a united western front in support of sanctions on Russia over Ukraine, a Greek default could provide Moscow an opportunity to sow new divisions among America’s European allies.

“You can easily see how geopolitically this would be a gift to Russia,” says Sebastian Mallaby at the Council on Foreign Relations. “You do not want Europe to have to deal with a Greece that is a member of Nato but which all of a sudden hates the west and is cosying up to Russia.”

Greece was regarded as a frontline state against the advance of Soviet-backed communism during the cold war. Its EU accession in 1981 is one factor that cemented its identity as a western democracy, something that was deepened 20 years later with the adoption of the euro.

For some months, the administration of President Barack Obama has been quietly urging Germany and other EU members to try to find a way to resolve the stand-off with Greece. While economic considerations have been at the forefront, diplomats say the EU’s position on Ukraine has also been part of the conversation.

By the way, how much has it been worth to Germany's Angela Merkel to keep Greece in the Eurozone? 240 billion.


Five years after the debt crisis spread from Greece, the record shows that Merkel has consistently defended the euro and backed German participation in euro-area rescues totaling 240 billion euros for Greece alone.


A Fool Such As I, Slim Whitman
Posted by Bruce Oksol at 2:44 PM