Hang on buckaroos. This certainly looks interesting. There may be other explanations but I'll post it and see what folks think.

First, the production profile for this particular well which I will identify later on in the post. But first, some data.
Monthly Production Data of an old vertical well, partial spreadsheet, only recent data: 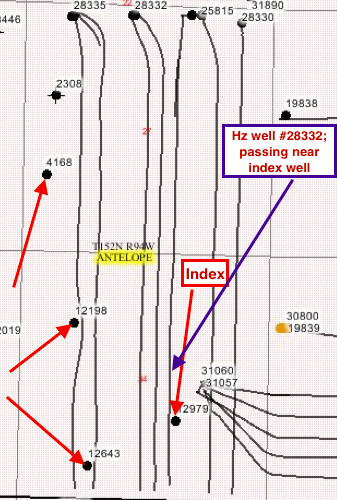 So, when was #28332 fracked? I'll answer that after we look at the production profile.

The production profile of #28332, the horizontal well:


This well was fracked 6/6/2015, the very month that the Gudbranson vertical well was taken off-line and then the spectacular jump in production the very next month.
Let's look at the production profile for the other vertical wells in the immediate area, but just for a few months of note. All wells are Antelop, Sanish pool vertical wells:


I only looked at the data of one horizontal well; there are many other horizontal wells in the immediate area that were also fracked at various times.

Note: in a long note like this, there will be typographical and factual errors. I may be seeing things that do not exist. I may be "over-reading" things. I may be misinterpreting data. I may be cherry picking data. If this information is important to you, go to the source.

In the big scheme of things, this is not a big deal. The increased production only lasts a few months, maybe up to a year. But if one has mineral rights, one might be surprised at a jump in one's "mailbox money." In addition, it helps me understand, or at least think about, water flooding in the middle Bakken and Three Forks (sandstone, dolomite, NOT shale).  One can also get a feel for how far -- radially -- fracking is effective. I continue to opine that fracking "only goes out about 500 feet radially." This helps one understand how close the horizontals can be / should be placed.
Posted by Bruce Oksol at 8:08 PM