QEP To Sell Some Non-Core Assets; $3,000/Acre Of Moderately-Good Bakken?

Back to this later, but for now, just the press release:

The third agreement provides for the sale of a non-core position in the western Williston Basin, known as “Fat Cat,” for a price of approximately $35 million and is expected to close in early June.

It's hard to tell from the most recent presentation how man acres are in west-central Williams County, but let's say it represents 10% of their total 116,000 net acres in the Bakken. That would be about 12,000 acres. $35 million / 12,000 acres prices moderately-good Bakken at $3,000. Some of it appears to be producing acreage.

QEP has three plays in the Williston Basin: 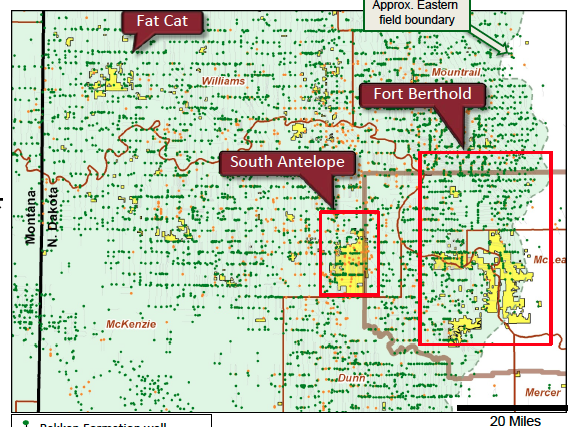 Slide 7 of QEP's 1Q14 Operations Update. The presentation did not include net acreage in each of the plays (although I could have missed that). Two earlier presentations did not include an acreage breakout by play, and none of the three updates said anything about Fat Cat. In all presentations, one slide was devoted to each of the two other plays, South Antelope and Fort Berthold.
Posted by Bruce Oksol at 4:25 PM