Following this report, TSLA drops 3% on a day that the market is surging.

Until I saw this, it was my impression that Tesla was going to have an incredible quarter.

It was my understanding this should not happen -- 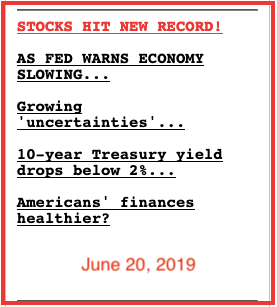 Wouldn't one expect the Treasury yield to surge after the US is shown to have $22 trillion in debt? Knowing that the US will have to inflate its currency in the future, wouldn't an investor in US bonds want a higher return? Maybe I'm missing something.

By the way, $12 trillion in non-US global bond debt is at a negative yield.


"There Won't Be Anymore" is a song written and recorded by Charlie Rich. Recorded in the 1960s, it was released as a single at the end of 1973, and was his fourth No. 1 hit on the Billboard Hot Country Singles chart in March 1974, and a top 20 pop hit as well.

Rich's version was recorded during his stint at RCA's rhythm and blues subsidiary, Groove Records, and his association with producer Chet Atkins, one of the architects of the Nashville Sound.

Like many of Atkins-produced songs of the era, "There Won't Be Anymore" featured choral backing and strings, a style prominent on other Rich recordings of the time. The song also featured a saxophone solo at the introduction and again during mid-song bridge. Allmusic reviewer Stephen Cook said that Rich's musical style "landed somewhere between the raw sound of his Sun hits ... and the pop crossover tone of his Epic smashes."

Issued in December 1973, at the time his Epic single "The Most Beautiful Girl" was peaking in popularity, "There Won't Be Anymore" quickly became Rich's fourth #1 song overall, and the first of his five chart-toppers during 1974.

From my journal entries: