Wow, wow, wow: overnight Dow 30 futures were up 60 points. Minutes (seconds?) after earnings reports from CAT, GM, 3M, and McDonald's came out, pre-market, futures jumped to 151 points, before pulling back a bit to 140 points. Amazing.

Another record high for the Dow 30.


Despite some hints that U.S. exploration and production companies are slowing some of their drilling in high profile shale basins — including last week’s decline of 15 operating rigs in the Baker Hughes count, our analysis of 43 representative E&Ps suggests that more than half expect their upstream capital spending in 2017 to exceed cash flow — a definite sign of optimism — and one fifth of the E&Ps will outspend cash flow by more than 50%.

Is this a case of rose-colored glasses? Blind faith? Or have E&Ps’ post-price-crash efforts to high-grade their portfolios and improve their operational efficiency given them well-deserved confidence that if they don’t “back down” on capex things will turn out well?  Today, we analyze the cash flow versus the capex of 43 U.S. E&Ps and discuss what it all means.

After weathering the oil price decline in 2014-16, U.S. E&Ps have been repositioning themselves to survive and even thrive in a $50/bbl world by (among other things) focusing on the sweetest of production sweet spots and wringing more oil, gas and natural gas liquids out of each well by drilling longer laterals, using more frac sand and fine-tuning their completion techniques. In late 2016, the 43 E&Ps we’ve been tracking announced a 42% increase in 2017 capital spending, and despite oil prices dipping below $50/bbl in the second quarter of 2017, our universe of producers remained committed to their accelerated investment plans.

But as noted above, there have been indications that E&Ps have started to pull back somewhat, with a 5% decline in the rig count since the end of July cited as evidence. 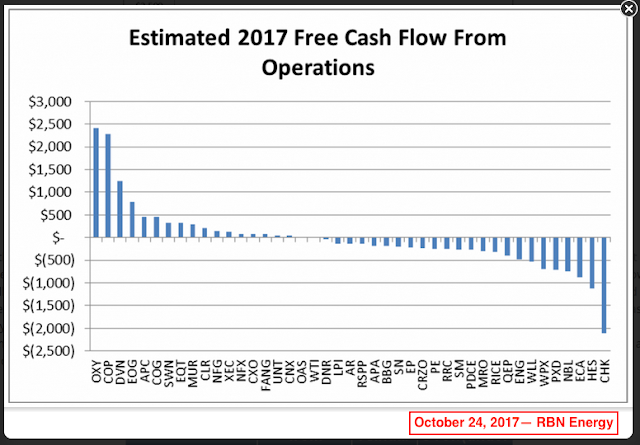 Earnings this morning before the opening bell:
Iraq: Iraq began using a new offshore crude-exporting facility to help boost shipments by sea and make up for a suspension of pipeline exports from the country's north due to a conflict with Kurdistan. Data points:
SPMs: single point mooring (same link) --


The loading point, known as a single point mooring facility, or SPM, had been scheduled to start operating in December (2017).

The government started the SPM earlier than planned because they want to raise exports from Basrah to compensate for the losses at Kirkuk.

Iraq exported an average this year of 3.25 million barrels a day of its Basrah Light and Basrah Heavy crude via the Gulf. The vessel Chloe is set to load a mixed cargo of Heavy and Light oil, according to the shipping agent report.

Iraq already operates three other SPMs, as well as four berths at its Basra Oil Terminal and another two at the nearby Khor Al Amaya terminal. When operating, the SPMs can pump about 900,000 barrels daily aboard tankers, but the time needed to carry out mooring and unmooring operations reduces their effective capacity to little more than half that amount. Bloomberg calculations show that the three older SPMs have loaded an average of about 480,000 barrels a day each since the beginning of 2015.

SPMs enable Iraq to pump crude to ships at sea without requiring that they dock in port. The country’s narrow coastline, hemmed in by Kuwait to the south and Iran to the east, has little room for shipping berths. Its shallow waters are difficult for the largest tankers to navigate and contribute to traffic delays.

Apple: iPhone X to remain in extremely tight supply once released. The operator word is "extremely." It seems every new Apple phone is in tight supply once released, but seldom are supplies reported as "extremely tight." LOL. Launch begins November 3, 2017, but on-line pre-orders begin this Friday (October 27, 2017.
Posted by Bruce Oksol at 6:35 AM