December 21, 2015: up to 3 feet of snow forecast for southern Washington / northern Oregon Cascades.


Original Post
The conference ended about two weeks; haven't heard a thing since then. This from an old post.


ClimateDepot is reporting on the second day of the Paris climate conference:


U.S. snow cover on the morning of December 1, 2015, is the highest on record for this day of the year. 38.7% of the U.S. (including a small part of southwestern Canada) is currently snow-covered.

Any of you who think that our ecosystem is so fragile that percentages of 792 parts per 100 million can even been measured, much less somehow change our climate, are fools.

Hell--don't break out the US or energy generation figures--16 ppm (16/1,000,000) can't be measured, either. It's all based on assumptions, not measurements. But leave it up the alarmists to pull another flim-flam--"Yes, we've been wrong--but it's much worse that we thought!" When will people stop buying the snake oil?

See if you can separate fact from fiction in these ten college student demands. I bet you can't. I couldn't. I failed.  Meanwhile, Yale students want the First Amendment repealed. And so it goes.

Last evening our two older granddaughters and their parents went to a "dinner theater" to watch Star Wars. Our older granddaughter dressed up just like Princess Leia (now, General Organo). So, I was left home alone to take care of 17-month-old Sophia.

We spent the evening upstairs where most of her toys are and where she can easily fall asleep if she gets tired (which she did not). There is a huge flat screen television upstairs as well as downstairs. Unfortunately, there was no remote anywhere to be found upstairs, and I had no idea how to set up the TV for television without a remote. I brought the TV remote from downstairs upstairs knowing that once I got the television set up, the remote would work for volume and changing channels.

Figuring that I had nothing to lose, I gave the remote control to Sophia to keep her occupied while I got out a book to read.

Sophia took the remote control -- this is 100% true -- and walked up to the television. The television is a huge screen but it sits on a fairly low console so it's about eye-level for her when she is standing up.

Sophia took the remote control and walked up to the television. She pushed the on-off button which I had not seen (and did not even know existed) and the television monitor came to life. The monitor, unfortunately, defaults to "Roku" which I have no idea how to work and even if I did, I did not want to watch re-runs of shows in syndication or whatever "Roku" provides.

Sophia continued to randomly hit buttons on the remote control when suddenly the "set-up menu" appeared on the monitor -- I wasn't fast enough to grab the remote out of Sophia's hands before "Roku" was back up on the screen. But at least I now knew there was hope.

At that point, the remote control worked fine for channel surfing, but not volume. But at least Sophia and I were now watching television.

Last evening our two older granddaughters and their parents went to a "dinner theater" to watch Star Wars. Our older granddaughter dressed up just like Princess Leia (now, General Organo). So, I was left home alone to take care of 17-month-old Sophia.

Sophia and I spent the first part of the evening watching television (see story above). The first channel that popped up was showing "Miss Universe" live, hosted by Steve Harvey.  Sophia was mesmerized: the music and the colorful gowns really caught her attention. Normally, she is only interested in commercials, but for some reason the "Miss Universe" contest really interested her.

Steve Harvey was just ready to announce the five finalists, so I knew the show was nearly over, and worth watching, especially if it held Sophia's attention for awhile. I could also check in on the NFL football game during commercial breaks.

We watched the crowning of Miss Colombia and then I stepped out of the room for a moment. I forget why, probably to catch Sophia who loves to climb up and down the carpeted stairs. In her bare feet she does quite well, but in her "footed" pajamas she tends to slide about six steps before catching herself. Outside the room, I heard Steve Harvey make his -- now famous -- "I have to apologize ..."

I rushed back in and could not believe what I was seeing. The story is all over the net for those interested. Even Rolling Stone has a story on the debacle. It's just a matter of time before President Obama invites Steve to the White House for a beer.

I don't think I've ever seen something so incredible in all my life on a show of that nature, and it was all occurring in real time / live. I have heard that Harvey has trouble reading those little index cards he holds on "Family Feud," also.

All night long, not one glitch, and then, the last card with two names on it.

The producer forget the KISS principle. 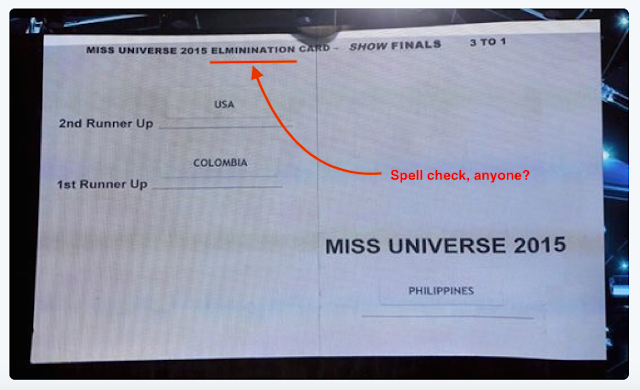