The other day I mentioned that I wondered how long Saudi would continue giving away its only natural resource to the Chinese at a greatly discounted price. The EU has an enquiring mind, also.

This is quite a story coming out Reuters this morning. The EU is deeply concerned about the staggering drop in the inflation rate. The sluggish economy was to blame for years, but now the severe slump in oil prices is adding to the problem.

The world seems topsy turvy:
I certainly did not see this coming ten years ago. "Everyone" was predicting higher prices for oil and inflation dangerously out of control by now.

A spectacular drop in crude oil prices over the past month will be the center of discussion when ministers from the world's top oil exporters meets in Vienna on Friday.

The key question there is whether Saudi Arabia, which signaled last month it was comfortable with lower oil prices, accelerating a plunge in the price of crude to a third since June, will stick to that view.

But rapidly-increasing U.S. oil production, coinciding with shaky demand from China and Europe, is likely to keep a lid on the price no matter what the Organisation of Petroleum Exporting Countries (OPEC) decides.

China cut its rates last week, pushing the US stock market, yet again, to new highs. And it may not be over.

Reuters, in an accompanying article, is also reporting that China is "ready to cut rates again on fears of deflation."

Friday's surprise cut in rates, the first in more than two years, reflects a change of course by Beijing and the central bank, which had persisted with modest stimulus measures before finally deciding last week that a bold monetary policy step was required to stabilize the world's second-largest economy.

Economic growth has slowed to 7.3 percent in the third quarter and policymakers feared it was on the verge of dipping below 7 percent - a rate not seen since the global financial crisis. Producer prices, charged at the factory gate, have been falling for almost three years, piling pressure on manufacturers, and consumer inflation is also weak.

Normally one might be able to make predictions about what the US stock market would do this week with two stories suggesting that BOTH the EU and China were ready to "print more money" to stimulate their economies, but the Thanksgiving holiday will probably make it more difficult to predict.

Here in Texas, some school districts have the entire week "off." Both our granddaughters started their 9-day Thanksgiving vacation last Friday, at around 3:00 p.m.

The two data links that will be become increasingly interesting over the next two years:
The slump in oil began the summer/autumn of 2014. I assume "we" are working our way through existing contracts and historical trading partners. My hunch is it takes about six months to work our way through those contracts. January, 2015, would be the earliest that we might see changes in imports (the first link, US oil imports from all nations), and it might take until March/April, 2015, to really start seeing changes.

I think it's going to be incredibly fascinating.

Some data points from the two links to US oil imports that surprise me: 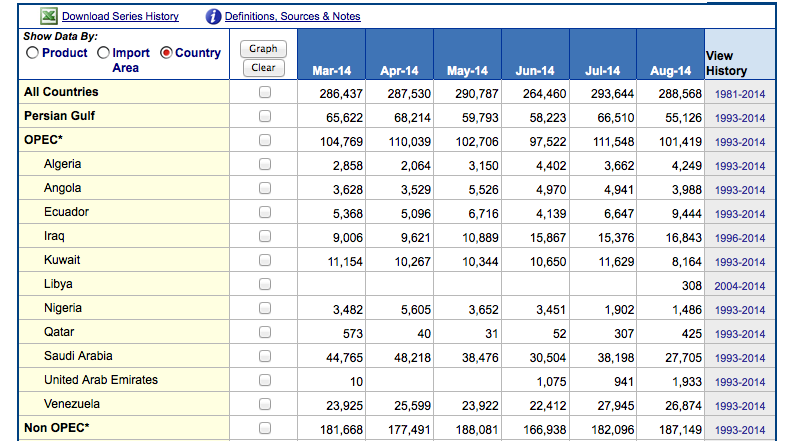 Bloomberg is reporting that Iran would like to see OPEC cut production by a million bbls per day. That won't happen and even if it did, it wouldn't make a difference.

I think OPEC is in a lose-lose situation.
Off-shore drillers, Russia, Venezuela will feel the most pain. Canadian oil sands, possibly.
Posted by Bruce Oksol at 9:52 AM