Update Of The Spearfish Oil Patch In North Dakota

Today, three Spearfish wells in the North Souris oil field came off the confidential list. One well is a Legacy well and two are Corinthian wells; as regular readers know, I can never remember the relationship among Surge, Legacy, or Corinthian (same link as the Legacy link), and I won't sort those companies out now. I'm just interested in the Spearfish in general at the moment.

If I had to provide a 30-second soundbite/data points regarding the Spearfish in North Dakota (see "Welcome/Disclaimer" and purpose of the blog):
At $50/bbl, a $3,000,000 well would require 60,000 bbls at the well-head to break even. Sort of.

So, some examples of some recent North Dakota Spearfish wells:
An example of what the drilling patter of the Spearfish/North Souris - Red Rock looks like: 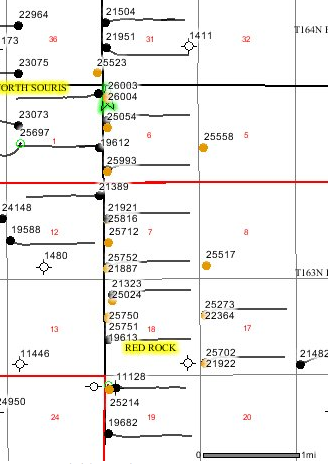 It should be noted that Barney and Fred lived in Bedrock and not Red Rock. It should also be noted that The Flintstones was the first American animated show to depict two people of the opposite sex (Fred and Wilma; Barney and Betty) sleeping together in one bed, although Fred and Wilma are sometimes depicted as sleeping in separate beds (source: wiki).
Posted by Bruce Oksol at 9:07 AM