I don't know how accurate that CNBC crawler is but that is what is being reported.

Generally, Saudi Arabia / OPEC needs to adjust their prices relative to WTI and Brent. If Brent crude had its biggest monthly drop in two years, one would assume Saudi Arabia's OSP (official sales price) will also have to drop. Saudi Arabia extra light is selling for $75.65; it's heavy oil is selling for less, $72.90.

This is an oilprice screenshot of crude oil prices for selected crude oils: 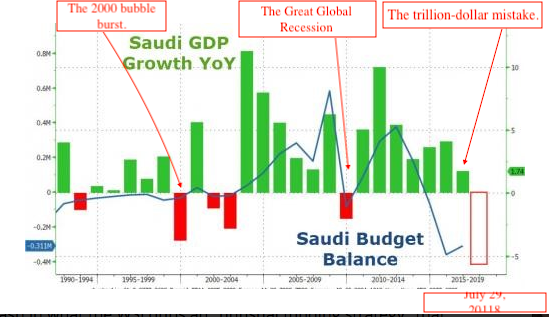 Saudi Arabia says it needs $70 oil. I assume Saudi Arabia is "talking their book" and, in fact, needs a lot more than $70 / bbl of oil. My hunch is that they need $80 (maybe more) to break even. Look at that deficit -- historical, tectonic move -- and the sizer of the projected GDP decline is unprecedented and staggering.


Iran: Iran's rial is in free-fall. Previously posted but a new link here. Note: sanctions have not even gone into effect yet --


Iran’s currency plunged to another record low on Sunday, dropping past 100,000 rials to the U.S. dollar as Iranians brace for Aug. 7 when the United States is due to reimpose a first lot of sanctions on their economy.

Bottom line: I think both Saudi Arabia and Iran are in deep, deep trouble, much deeper than they are willing to admit, but each for different reasons. As despotic regimes, it matters not to their leaders how severely affected their citizens are, but food for thought:
*************************************
Weekly API Data