Wow, I could not be in a better mood.

1. The market is playing out perfectly for savers and for those invested in companies paying nice (and safe) dividends.

3. Earnings are coming out. Energy companies earnings, year-over-year, are going to be spectacular. Whether that is already "baked into" the price of shares is hard to say.

4. The narrative has flipped: four weeks ago, "everyone" was upset with Trump's tariffs. Now, most agree that tariffs against China are entirely legitimate.

5. The Chinese, tit-for-tat, places tariffs on 128 products. It was probably not a good idea for the Chinese to do this, but it is what it is. My hunch: Trump will let it ride. With regard to tariffs, it looks like Trump knows what he is doing.

6. Some worry about inflation. I'm not. But if there is inflation, it will not affect the average consumer. It may affect corporations, but corporations got such a great tax break, the risk of inflation and the cost of doing business (interest payments) will be offset by the tax break.

8. The graphics on an earlier post regarding the "southern wall" will be the gift(s) that keep on giving. Trump says he got less than he wanted with regard to the "southern wall" in the omnibus bill; that's in the eye of the beholder. I would argue that he got more than he expected.

9. Sixteen reasons (which have now become twenty-five) are still in place (there may be some exceptions; I haven't checked the 25 reasons lately).

10. Steve Jobs had many quirks. Tim Cook inherited some of that DNA. Two quirks:

One year ago before her mom (our daughter) packed away the Easter "stuff," the middle granddaughter adulterated one of the "Hello Kitty" stuffed toys. Her mom did not notice. Her "Hello Kitty" collection is sacrosanct.

This year, opening up the "Hello Kitty" collection for Easter, our daughter found the enclosed, see photo below. She was NOT happy. The rest of us are still laughing. 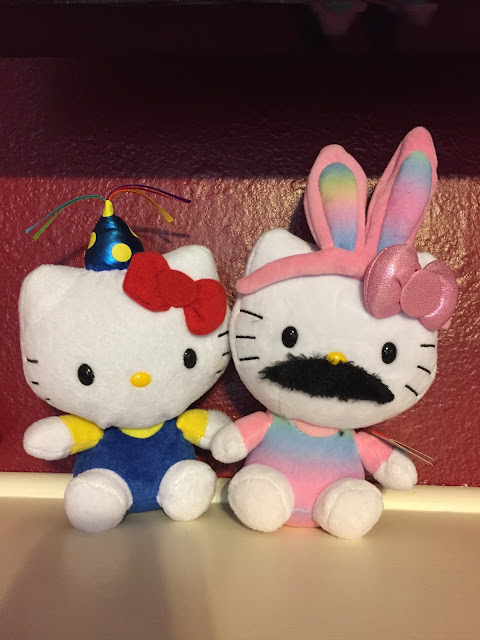 For those who are not familiar with "Hello Kitty," no, they do not have moustaches.