Incredible! What I've Been Waiting For! Zeits On Global Crude Oil Re-Balancing -- April 2, 2018

So, now, Richard Zeits comes to the rescue. I haven't read it. Here is the link. I'll read it and come back with comments, if the spirit moves me.

Zeits' summary:
My summary:
The question: what leads OPEC to underestimate the EIA"s numbers?

This is the bottom line, worst case scenario -- OPEC's estimate -- "the global market will be undersupplied by 0.4 million bbls per day in 2018." That's the best OPEC can do? LOL.

"Millions" seems like a huge number -- especially on a "per day" basis.

Not only is that a rounding error, but if anyone thinks anyone can calculate the amount of oil sloshing around in tankers, pipelines, rail cars to that degree of accuracy ... is, well ... should I say, nuts?

I've dropped the bubble for the Permian, but I'll let readers correct me. The Permian currently produces about 2.5 million bbls/day and will easily ramp to 3 million bopd by the end of the year (2018).  And that's just the Permian.

Bottom line: if the best OPEC can do is "threaten" a shortfall of 400,000 bbls/day this year -- this is great news for consumers, but not necessarily great news for oil bulls.

Other data points from the article:
My bottom line:
Forecast for US crude oil production: 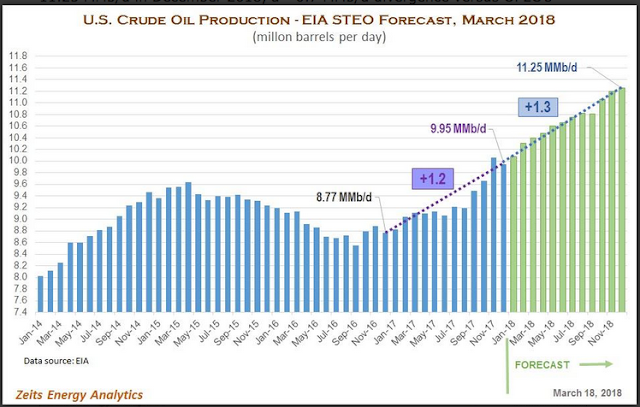 Venezuela imports (US), weekly, most recent data reported by EIA through the fourth week of March (about as current as one can get). Can someone please point out the huge drop in Venezuela  exports to the US?

My two cents worth. The only case/hope for $75 Brent (currently $68 and falling) is