Price of WTI: I find this fascinating. There are some "analysts" that think WTI could jump from $75 today to $100 by the end of the year. That would be a pretty steep rise; for comparison, check out the historical price of WTI. Link here.
This is what some "analysts" are saying:


OPEC kingpin Saudi Arabia is ill-equipped to prevent a supply shock in the energy market, analysts told CNBC on Monday, as oil traders prepare for the possibility of $100 a barrel before year-end.

This is pretty "rich," as they say.

Elon Musk is sued by the SEC; refuses to deal; is stripped of his chairmanship; allowed to remain as CEO; and his company's stock surges.

Meanwhile, John Flannery, after less than fourteen months on the job is summarily fired. If one goes to the dictionary, one now finds a picture of Flannery next to "summarily." 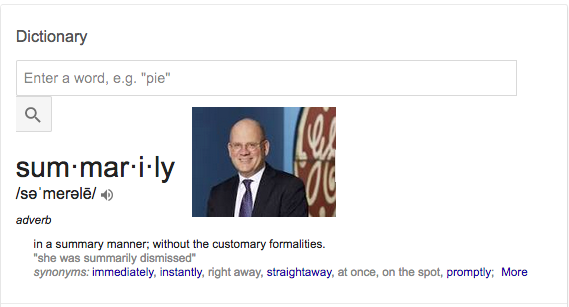 Every day I start with a clean slate. And every day I'm surprised.

I go where the blog takes me.

LOL. While taking notes on the book I'm reading for the week, I was "researching" how one measures the speed of waves -- measuring the speed of a wave across a pond, for example.

Then this: the highest reliably measured ocean waves were reported by officers of the Navy oiler USS Ramapo in the North Pacific on February 7, 1933.


By triangulation on the ship's superstructure, they measured a wave height of 34 meters (112 feet) peak to trough. The period of the wave was 14.8 seconds and its wavelength was calculated to be 342 meters. Using the wave velocity expression for this wavelength in the deep water limit, the wave speed is calculated to be 23 m/s. Mayo calculates the power of one meter length of such a wavefront to be 17,000 kilowatts!

The crew of the Ramapo measured these waves and lived to tell about it because their relatively short ship(146 m =478 ft) rode these very long wavelength ocean mountains without severe stresses on the craft. Mayo expresses concern about the safety of some modern giant ships (>250 meter length) in such seas. 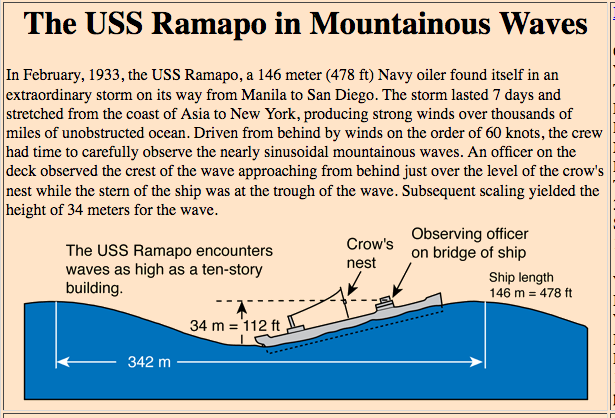 From wiki, this one line but so much more at the link:


On 7 February 1933, while cruising across the Pacific Ocean from Manila to San Diego, the ship encountered the tallest rogue wave ever recorded, measuring 112 ft in height.

The super-tankers transporting oil today are upwards of 1,500 feet long.

We have a Hopdoddy Restaurant about five minutes by bike from where we live. It's brand new. Hadn't seen it before. Long story. All I have time to say is I found it because of Sophia.

Link here for the  Ft Worth story.


This is so incredible on so many levels.

I was waiting for the one word but they did not use the most important word in any of the linked articles or the video.

But other than that, it took my breath away.

Years ago, I read a Wired story about a type of new computer chip. I bought shares of stock in the company making that chip and the rest is history.
Posted by Bruce Oksol at 7:36 PM