Let's see where this will go?  Lead story over at Rigzone, "how much oil can Saudi really pump? We're set to find out."


For the first time since Saddam Hussein invaded Kuwait in 1990, Saudi Arabia could face the ultimate petroleum test: pushing its complex network of oilfields, processing plants, pipelines, tank farms and export terminals to the limit, pumping every possible barrel of oil.

Today another Middle East crisis is stretching the Saudi oil machine. U.S. sanctions on Iran are crippling exports from the Islamic Republic, prompting buyers to look to the world’s largest exporter for replacement barrels.

In a pithy description of its role during a supply crisis, Majid Al-Moneef, a former Saudi senior oil official, told U.S. lawmakers a few years back that "Saudi Arabia is the ‘Federal Reserve of oil,’" according to American intelligence cables published by Wikileaks.

Yet, unlike a central bank, the Saudis can’t print unlimited amounts of money. Their crisis-fighting tool is finite: a buffer of wells sitting idle in the desert. Use them now, and there’s nothing left for the next crisis.

OPEC’s current spare capacity is relatively thin. The U.S. Energy Information Administration, puts it at just 1.4 million barrels a day, and estimates that it will drop to 1.2 million by late 2019, one of the lowest levels on record and similar to 2008 when oil prices zoomed to $150 a barrel.

Nonetheless, Riyadh says there’s lots of extra oil at hand. Energy Minister Khalid Al-Falih last week said more barrels can flow "within days and weeks." Officially, the kingdom claims to be able to pump at a maximum of 12.5 million barrels a day, up from a near-record 10.4 million produced in August -- spare capacity of more than 2 million barrels.

Let's see what this is all about. Another lead story over at Rigzone, "a breakthrough for hydraulic fracturing."

The study found that methane concentrations in the studied water supply did not increase over a period of four years, and the methane present was from plants, not fossil fuels — even while more than two thousand new horizontal wells were drilled in the region.
Reached for comment, Professor Amy Townsend-Small, one of the study’s authors, emphasized that her study analyzed many water samples over “a long time series of fracking activity.” She added that “most studies before mine only sampled once.” In other words, this rigorous study showed that the massive expansion of hydraulic fracturing operations in the Utica Shale did not increase methane in the local water supply. Hydraulic fracturing advocates now have a new public message and legal tool to push back on restrictive litigation and legislation.

The study was published in May 2018 in Environmental Monitoring and Assessment by scientists from the University of Cincinnati and University of California-Irvine. Its authors measured methane in water wells near drill sites, analyzing for pH, electrical conductivity, radiocarbon dating, and isotopic composition. They found that the proportion of water-borne methane attributable to a “fossil fuel derived natural gas source” did not increase as fracking operations expanded. Instead, most methane near the sites was attributable to biogenic and bacterial sources, and that remained true even as drilling increased.

The authors began their survey of the Utica Shale play in 2012, just as fracking operations were beginning to boom. The study focused on wells in Carroll, Harrison, and Stark counties. The study authors hypothesized that methane concentration in the water supply “would increase as the number of shale gas wells in the area increased, with the isotopic composition of [methane] reflecting an increasingly fossil fuel derived natural gas source.”

Heard in the oil patch: Feinstein, Schumer, et al, want the FBI to investigate Professor Amy Townsend-Small. How did she get government funding for this research in light of the results?

TSLA: as predicted over the weekend, TSLA would surge today. TSLA is up 15% in pre-market trading. 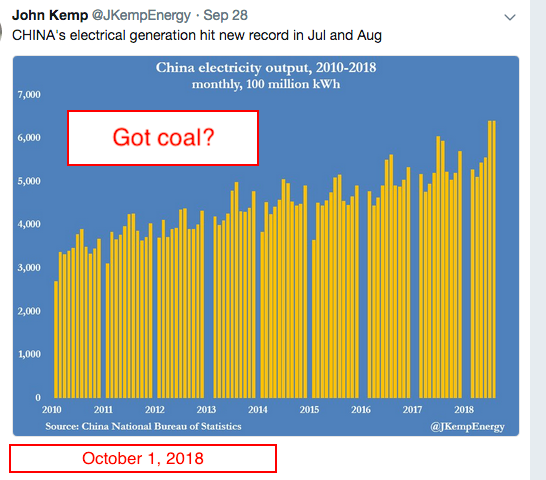 Wells coming off the confidential list -- Saturday, Sunday, and Monday --


Thanks to the shale revolution, U.S. refiners have spent the better part of the last two years achieving milestones in export volumes and run rates. The U.S. exported record volumes of gasoline and diesel last year. Much of that newfound international market share came at the expense of ailing refining complexes in Latin America, particularly in Mexico. That worked out great for U.S. refiners on the Gulf Coast, who could load up a tanker of fuel and have it delivered within a matter of days. Now the market on both sides of the border is shifting; the political landscape has changed in Mexico and gasoline demand growth in the U.S. is threatened by higher oil prices. Today, we lay out factors impacting exports and demand in the U.S. gasoline market.

There’s no question about the strength of the U.S.’ refining industry. Oil market price dislocations in Western Canada and Midland, TX, have helped incentivize refiners that have access to the cheaper crudes to run full-out. In recent weeks, U.S. refiners’ gross oil inputs ran near about 18 MMb/d of oil – a record high. (These run rates are dipping as fall maintenance season kicks in).