Notes From All Over, Early Saturday Afternoon Edition -- Marh 28, 2020

Top stories for the week have been posted, link here.

North Dakota, Wuhan flu update. Looks like Bismarck is the "hot zone" for the state. And I doubt the "index" cases arrived from the west (Montana) and moved east. Just saying. 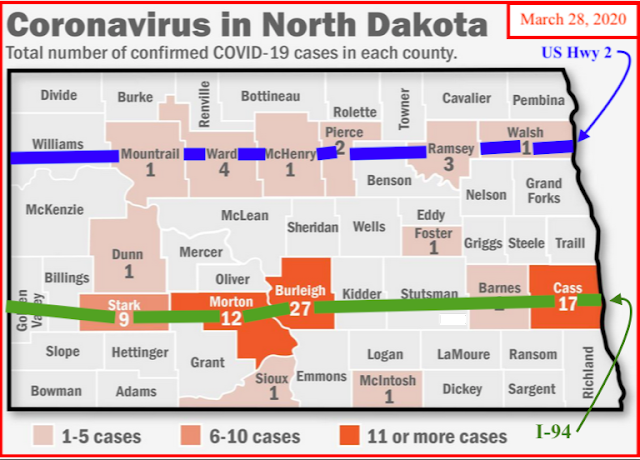 By the way, this points out the problem with the "community acquired, no history of travel to an endemic area." Obviously one doesn't have to travel at all if folks infected with the virus travel to your home. If a super-spreader from out-of-state travels through Bismarck, stops overnight, before leaving the next day, imagine the number of folks that will get infected.

It's irritating when "local" folks are abiding by the rule to "stay-at-home" and then "non-local" folks end up in one's community carrying the disease. But then again, it's eventually going to happen sooner or later.

Daily grocery store inventory: wow, I love free market capitalism. Our neighborhood grocery store, the last to "come back," among the seven or eight fairly high-end stores in the immediate area, is pretty much back to normal.


I assume the majority of foot traffic is going to Walmart, Target, Albertson's and Market Street, in that order. Our Tom Thumb: lookin' good. It appears a refrigerator truck came in overnight. I forgot to check bread; I have enough. Canned goods back to "more than adequate." Pasta starting to come back. Most surprising: fresh beef finally showing up again. I forgot to check paper products. Ears of corn have jumped from 33 cents/ear to 69 cents/ear. More than enough milk, but perhaps not the particular brand different folks want. But more than enough. And lots of eggs. Tom Thumb / Texas: we're back!

Local Costco: my daughter tells me that Costco was not a bit busy yesterday. Back to normal.

Wuhan flu: NYC on track to have more cases than being reported in all of China (of course, the Chinese numbers are suspect but that's more than the mainstream media can comprehend). The big question: why has the city/state/neighboring states not been quarantined? There may be US constitutional reasons, but there are ways to manage that.
Posted by Bruce Oksol at 1:29 PM