If you go to today's report (March 28, 2020) the numbers are obviously not in yet -- the day is only four hours old, but if you click on the "yesterday" button (March 27, 2020 — I assume), we see that North Dakota recorded its first coronavirus death. Sixty-eight cases total; sixteen new cases; and the first reported death. It would seem with only sixteen new cases, the state's public health department would know exactly where these cases originated.

" ... a man in his 90s from Cass County. The man had underlying health conditions and acquired the virus through community spread, the state Health Department reported."

The governor's executive order: barber shops are to be closed. Yes, I know a Cowsills' song I could post, but I won't.

In case you missed it, "seasonal flu" in the United States has just been declared an epidemic by the CDC. 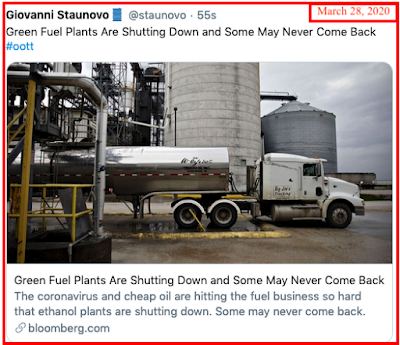 Texas: all indications are that "school" is over for this year in Texas. It appears Texas public schools (and I assume most private schools) will finish the year "on-line." Reason?


The New Orleans-Houston connection. New Orleans is out of control; Houston should be in a panic. Where do folks from New Orleans head when disaster strikes? Hopefully Joel Osteen is better prepared this time around. As Houston goes, Texas goes.

By the way: Texas airports -- at least DFW Airport -- has been instructed to process travelers from US "hot spots" (notably New York and Louisiana) differently than other passengers.


Passengers arriving on flights originating from hot spots (notably New York and Louisiana, for those who missed it the first time), will be interviewed and temperatures taken before exiting the airport. Those passengers must provide an address where they will be under mandatory quarantine for fourteen days, apparently regardless of any other mitigating factor. Those with a fever obviously will be evaluated by medical personnel.

My hunch: because of DFW, it's very, very possible, "we" -- literally our Grapevine, TX, neighborhood -- will become a "hot spot" before it's all over. On this hunch, I hope I'm wrong.

Toilet paper: I can't remember if I posted this.


Things are simply moving too quickly. Texas?We're back. The shortages seem to be coming to an end. I stop by our neighborhood grocery story twice daily. I was blown away. It almost looked like a normal store. I found the assistant manager and thanked her -- telling her that it appeared they were getting back to normal. She said "they were getting there." My only concern was a lot of fresh produce might be lost simply because significantly less foot traffic and less produce being bought. The produce section was very, very well supplied. The assistant manager told me that they had actually run out of produce (it must have been very selective; I never saw any real shortage) during the past couple of weeks and today was their first real day being caught up.

The shelves were filling up again and surprise, surprise: Clorox displays were now throughout the store, not just in the cleaning supplies aisles. Only in free market capitalism. Truly amazing how fast things turned around. Toilet paper shortage? Did that last seven days or eight days?

Phase 4: I don't know the three phases, but the $2 trillion bailout/stimulus/New Green Deal passed is colloquially referred to as the "Phase 3 Rescue Package."


Apparently movers and shakers are now talking about a "Phase 4 Rescue Package" which could be even bigger. President Trump suggested that he was open to a "Phase 4" package -- the focus? The states. This came out during the Friday night, March 27, 2020, daily Wuhan flu task force update. By the way, this was such a big, big deal that unlike most updates when the mainstream media does not televise the daily task force briefings, the cable networks broadcast upwards of sixty minutes of President Trump at the briefing, most of them finally cutting away when "he left the building."

Wow, what a nuisance. This reminds me of the Apple-U2 debacle, all over again.

"How to enable or disable Apple Music's new release alerts in iOS." Wow, this is going to be a hassle.


Apple on Thursday began rolling out a new Apple Music feature on iPhone and iPad that alerts users to new albums, EPs, and videos from artists included in their music library.

The alerts show at the top of the Library tab in the Music app, and given that they relate to content that's available in Apple Music, they're likely to be welcomed by most subscribers to the streaming service.

But even if you don't subscribe to ‌Apple Music‌, these alerts are still pushed by default to your device's Lock Screen and Notification Center, and may quickly become a source of annoyance. Whatever your preference, the steps below show you how to enable or disable these new release alerts.