Color me surprised. It never surprises me, how many Native Americans live within three miles of where folks actually want to work. Or how trout seem to be everywhere and yet I've had little success with trout fishing over my lifetime.

From The Lacrosse Tribune: Wisconsin DNR gives OK for another frack facility.


The Wisconsin Department of Natural Resources issued a permit Monday allowing OmniTRAX Logistics Services to fill just over 4 acres of wetlands in order to install nearly 10 miles of track in a loop along the banks of Halls Creek, a Class II trout stream that feeds into the Black River.

OmniTRAX says it will use the terminal to fill more than 80 rail cars per day with sand from a nearby mine. Sand will be processed near the mine and brought to the rail terminal by a nearly 2-mile-long conveyor that will pass under two public roads. The company says it intends to ship about 3 million tons of sand each year to Montana and Texas, where it will be used to extract oil in a process known as hydraulic fracturing.

Midwest Environmental Advocates objected to the permit on behalf of the Ho-Chunk Nation, which has land less than three miles from the site.

I assume the Midwest Environmental Advocates would have no trouble with bald eagle slicers and dicers on that land if a wind energy company sought a permit for the very same area.

Reluctantly, Britain's Foreign Secretary, in 1839, agreed to a "limited war" with China over the opium trade, siding with Big Opium. From The Opium Wars, Hanes III, c. 2002:


Further complicating the strategy against China was the weakness of Prime Minister Melbourne's Whig government, which held power by a tiny majority. With the government threatening to fall at any moment, was this really a good time to launch a foreign adventure, no matter how limited in scope?

Plus, the Exchequer was basically broke. Unbalanced budgets had produced huge deficits of £1 million pounds or more per annum for the past three years. Melbourne believed that a weak Parliament would never grant the fund to reimburse the traders for the £2.5 million of lost opium, much less an even more expensive war halfway around the world.

Goaded by is Secretary of State for war, however, the legendary 89-year-old historian Thomas Babington Macaulay, Melbourne came up with an ingenious way to fight a war against th Chinese -- make them pay for it.

After a brief conflict, which Melbourne expected would be a quick and efficient rout, China would be forced to pay reparations, which would serve as reimbursement for the opium it had confiscated.

The plan had a neat tautology to it.

The Brits prepared for war.

I find this fascinating:


The isolation of morphine was the beginning of alkaloid chemistry, which has yielded many important medicinal substances.

Although a satisfactory theory of analgesic structure or action still eludes us, experimenters have developed a number of synthetic analgesics related to morphine.

The oldest is pethidine (also known as meperidine, Demerol and about 40 other names).

It was synthesised in 1939 by the German chemist Otto Eisleb. It is less potent than morphine, but is still widely used for the relief of post-operative pain. By replacing one of the -OH groups with a methoxy group, morphine is converted into codeine, another powerful painkiller. When mixed with paracetamol it goes by the trade name Tylenol. When ingested, the -OCH3 group is converted back to -OH, regenerating morphine. 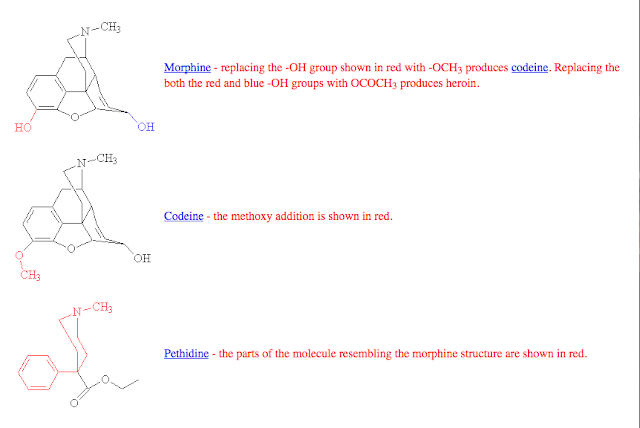 US Civil War and morphine.
Posted by Bruce Oksol at 8:31 AM