The Good News: It's Only Thirty Degrees Below Zero This Morning In WIlliston; The Bad News: The Wind Chill Could Approach Minus 60 Degrees -- Happy New Year's Eve -- December 31, 2017

This will clearly be the midwest winter story of the year: the Arctic blast that hit the midwest just before the end of 2018. President Trump kept another of his campaign promises: repealing global warming. And he did it in his first year of his presidency, something that presidents have been unable to do since 1994. 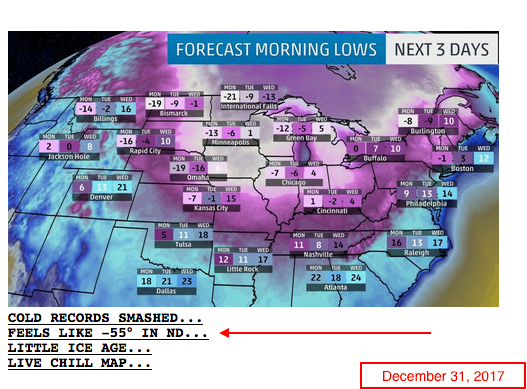 By the way, this is interesting. I will have to go back to my journals to see if I can find the date, but while serving in the USAF many decades ago, we were taking a Christmas vacation back to North Dakota. I can't recall if we were flying from California or if we were stationed overseas at the time.

We had a layover, or a connecting flight, out of Sioux Falls.

We boarded at Sioux Falls as schedule, en-route to Fargo.

The plane taxied to the end-of-the-runway and stayed there for several minutes before rolling out. But the plane never rotated, never left the ground. It gradually came to a stop at the end of the runway. We stayed there for several minutes before the plane taxied back to the opposite end of the runway, apparently to try taking off again. After a few minutes at that end, the plane took off; this time successfully reaching cruising altitude.

Once at cruising altitude the pilot came over the public address system and explained the aborted take-off and the successful take-off. On the first roll-out, the needles on the hydraulic gauges showed no hydraulic pressure (which control most of the important in-flight controls: rudder, flaps, etc); so, they aborted the take-off.

While trying to figure out what was wrong, they were told it was 40 degrees below zero in Sioux Falls and most likely the needles were simply frozen, and most likely the hydraulic systems were working just fine. (At altitude it is normally similarly cold 24/7 year-round.)

The pilot thought that was most likely and decided to try it again. After all, what's the worse thing that could happen? LOL.

But we made it to cruising altitude.

About halfway to Fargo, the pilot came back on the PA system and told us we would be returning to Sioux Falls. The runway at Fargo had closed. The temperature at Fargo was minus 60 degrees. But that was not the problem. The crosswinds were the problem. Crosswinds were too strong for planes to land.

So, we spent the night at a Holiday Inn in Sioux Falls where our two daughters had a great evening swimming in the heated in-door swimming pool.

[I can't recall for sure. I've told that story many times, but now I wonder if the temperature in Fargo was minus 60 degrees or whether that was the wind chill. I really don't know, but I've always thought it was 60 degrees below zero real temperature. I'll have to find my journal entry and see if I can find the newspaper clipping. I know I kept a clipping of the weather report that day; it made headline news that day. Later: looking at the record lows for Fargo, it appears that the "minus 60" was a wind chill temperature.]

If the spirit moves me, I will tell you about another weather-related flight in North Dakota some years ago. It's even more incredible in some respects.
Posted by Bruce Oksol at 9:59 AM