$300 billion: The other day Saudi Aramco said it would spend $300 billion over the next decade in the oil sector after "fretting" over global oil supplies in the out years. Now, today, we learn that India wants to spent $300 billion on oil to meet growing demand. Couldn't India simply send $300 billion in cash in small unmarked bills in an American C-130 under the cover of darkness. Oh, wait, the US already did that under the previous administration. LOL. But whatever, I digress. Time to move on.

Privatization: Bloomberg has an interesting angle to the story yesterday that a "world class" formation was found off-Mexican-shores. It's interesting that Bloomberg was able to publish this. This seems antithetical to the Obama/Hillary/Schumer/Pelosi crowd:


A consortium of Premier Oil Plc, Sierra Oil & Gas S de RL de CV and Talos Energy LLC made the discovery in the shallow waters of the southern Gulf of Mexico just two years after winning the exploration license. It’s the first new find by a private company in the country in almost 80 years, according to consultant Wood Mackenzie Ltd., possible only after the government ended the monopoly of state-run Petroleos Mexicanos.

Job watch: first time claims for unemployment claims data is released at 8:30 a.m. ET. While waiting, one can view the graphic of past data here.  Last week was not a good report, but the overall data for last week was incredibly good (part of the Trump story, I suppose). This week, econoday forecasts another huge number: 246,000 first time claims, almost as bad as the previous week. So, we will see. It's always interesting to see how the market reacts, and then how the White House spins the story if it's a bad report.

The jobs report:
Oil production cut? What cut? This story is getting older and older. Reuters provides an update -- something we've reported on the blog for months:


OPEC's compliance with production cuts fell in June to its lowest levels in six months as several members pumped much more oil than allowed by their supply deal, thus delaying market rebalancing, the International Energy Agency said on Thursday.

Hypocrisy, but I guess this is why we haven't heard much (anything?) from the previous president on this issue, LOL: 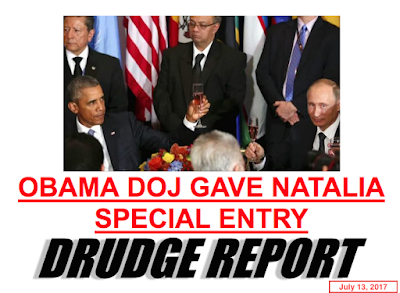 The pulse of America: one of the reasons the Drudge Report is so popular -- it has its thumb on the pulse of America. The photo above encapsulates what Americans know about the current witch hunt - regardless of what side of the issue they are. Speaking of a witch hunt, I am thrilled to have recently read Witches by Stacy Schiff. It helps put the term into perspective. Now, that was a "witch hunt." LOL.
Posted by Bruce Oksol at 7:06 AM