Shopping list: see first comment -- you, too, can help the DAPL protesters ... supplies needed. It may take a moment to load, but it's there.

DAPL weather: no travel advised in several counties; Bismarck and Mandan schools closed. Many schools across western North Dakota closed or delayed openings. Bismarck is north of Standing Rock Reservations. No travel is advised across several western counties including Mountrail County. It seems the area around Minot and Bismarck are the worst hit. Conditions have worsened: 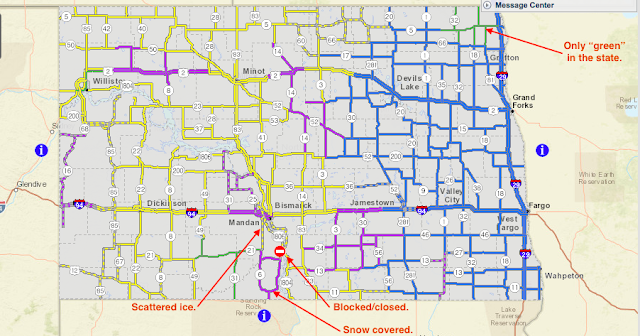 Yesterday, it was reported that ND Highway 1806 into the reservation was still blocked/closed; ND Highway 6 was suggested as the alternate. Today, ND Highway 6 is in worse condition with scattered ice. Yellow in the map above: ice and compacted snow.

For newbies: this is NOT what the protest camp looks like today -- maybe The New York Times will send a photo-journalist out to the camp and get a current photo: 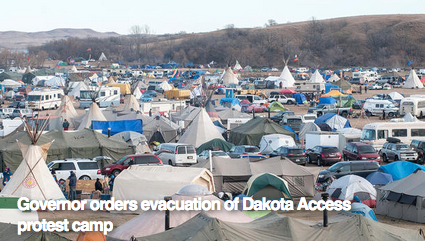 Dickinson got 10 inches of snow on Monday.

6:00 a.m. surprise: after reading about disarray in OPEC over upcoming meeting; and, the downward trend in the price oil, I would have thought Dow 30 futures to be trending down. In fact, Dow 30 futures went from negative three to positive five during the night and now up 22 points in futures.

6:42 a.m. surprise: doesn't even make MSNBC "Morning Joe" news or Drudge report, and not the first story over in Los Angeles Times: 70 killed when plane carrying Brazilian soccer team crashes. May have run out of fuel.

World Chess Championship: at end of 12 matches, it ends in a tie. Now, we begin with the tie-breakers on Wednesday: rapid games and the blitz.

Costlier sand: shale rebound starts with costlier grains of sand.
This doesn't look like an industry in distress.

President Obama ceded the Arctic to others. Norway and Russia step up cooperation in Arctic hunt for oil.
Iraq: Shell considering selling its Iraq oil assets


RBN Energy: Texas is flipping from a net producer to a net demand region. What?
Posted by Bruce Oksol at 5:42 AM