Data for the wells coming off the confidential list today have been posted; quite a mixed bag due to slump in oil prices. Five "Bakken" wells released from the confidential list. The EOG well was huge, with almost 80,000 bbls in the first few months, despite being pretty much shut down in January, probably due to slump in oil prices, but don't know for sure. A Zavanna well is shut-in/inactive. Newfield has a huge well, a Sand Creek Federal, and Whiting has a nice well in Bell oil field down in their Pronghorn prospect. The fifth well, a Statoil Banks oil field well, went to DRL status.

Yesterday, I wrote this:


That was last night.

This morning, two headlines:
All we need now to make it a trifecta: a UN resolution backed by the US condemning Israel; that's coming.


Nothing to fear. With pricing set to start at $349, Apple’s watch will not be playing in the same league as the Swiss watchmakers who dominate the luxury end of the market. The sweet spot for a topend timepiece from Tag Heuer is in the 1,000- 7,000 Swiss franc ($1,070 - $7,500) range, with some models costing [much more].

Today, Tag Heuer announced it will be marketing an Android/Google smart watch.

Tag Heuer's product line will look something like this: 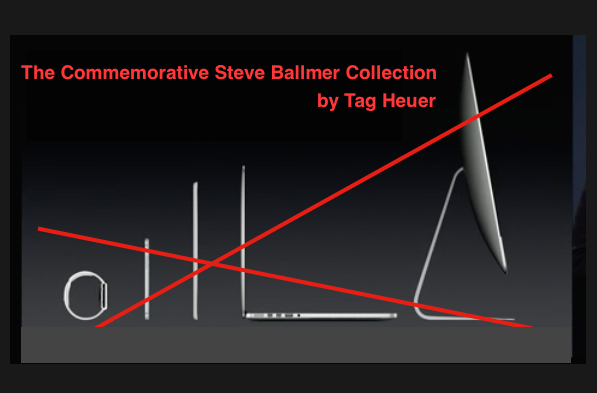