ICYMI -- This Is The Reason For The Huge Decrease In US Crude Oil Inventories -- Making America Great -- July 10, 2019

US crude oil and petroleum products exports: at this link. Lags about two months.

US crude oil exports: at this link. Lags about two months. 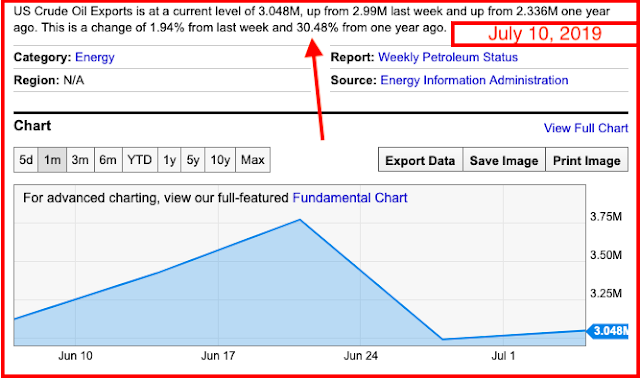 My two books for this week will be:
I've long completed my Hemingway and Brontë phase, but I've long forgotten the history of the three sisters, so time to take another look. Hemingway? I've lost interest in Hemingway long ago but "he" (or the myth) remains fascinating and so it's hard to pass up another account of his life.

Valerie Hemingway was born Valerie Danby-Smith, an Irish reporter back in 1959, when she first met Ernest Hemingway, devoted two years of her life traveling with Hemingway and his wife, Mary, through Spain and France, and living with them during the final months in Cuba.

Back to the Brontës: the three sisters, Emily (Wuthering Heights); Anne (Agnes Grey); and Charlotte (Jane Eyre, more; friend of the family's biographer, Elizabeth Gaskell). Charlotte outlives Emily who refused medical attention and died in December, 1848. Their brother, Branwell, the ne'er-do-well, died only three months earlier, September, 1848. Anne was also very ill at the time, and dies while at Scarborough in May, 1849. Charlotte, along with their father, Patrick, survived them all. In her grief, Charlotte persevered by writing Shirley.

It will probably be a slog to get through this thin biography but it will bring back memories of some of the happiest days in my life while living and working in Yorkshire, England, United Kingdom.
Posted by Bruce Oksol at 9:50 AM