Before getting started (by the way, if you ever want to find this clip quickly, search "doofus"):

We just can't drill our way to lower prices -- we also have to build pipelines. Gasoline is twice as expensive in California as it is in Texas (or so I'm told by my brother-in-law) --

See these posts:
Now, back to the Global Witness story. By the way, this story has now gone viral: Nick Cunningham took credit for contributing this story to zerohedge.


Peak oil? What peak oil? oilprice rewrites Global Witness article with headline that "US will drown the world in oil." Global Witness is an international NGO established in 1993 that works to break the links between natural resource exploitation, conflict, poverty, corruption, and human rights abuses worldwide -- according to wiki. Wiki states the organization does not have any political affiliation. I'm resisting posting links, etc. but I've given up. Good, bad, or indifferent, it's an interesting article -- I'll re-post as a stand-alone.

Talk about cognitive dissonance for Nick Cunningham. My hunch is that many "peak oilers" who make their living off newsletters, consulting, etc., which will gradually morph into "global warming" experts. It's hard to stop a train.

The first graph that caught my attention, the graph below based on data from Rystad Energy. Note which countries are not on the list. This is very, very accurate based on previous reports, and explains why oil is an existential issue for some (most) Mideast countries. There is a great interactive graphic at the linked site, but the graphic below really catches one's attention. Note Pennsylvania and then remember that New York bans fracking.

See first comment at this post. The graphic has to do with NEW oil and gas production, not total production.

Neither California nor Alaska are in the graphic.

Wyoming, Utah did not make the list but Colorado did, again for NEW gas and oil.

Pennsylvania, at 7%, is more than twice that of Russia -- that's huge, but when Ohio will produce almost as much NEW gas and oil as Russia ... 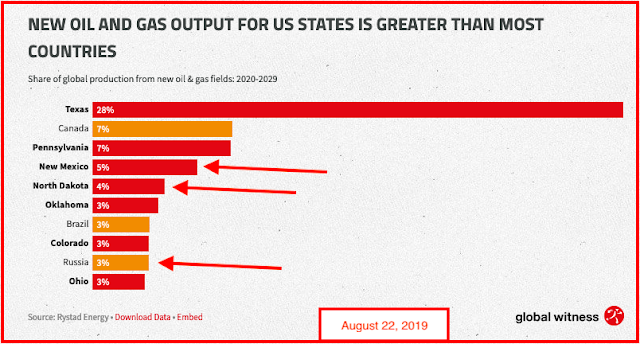 For new oil and gas production, seven out of the top 10 biggest oil and gas producers would be US states, with only Canada, Brazil and Russia making it onto the list. Pennsylvania is set to be the third, producing more than double new gas and oil that that of Russia.

I don't know how many ways one can show it, but here's another graphic. It's not so much that the US will contribute 60% of the new global production, but rather: 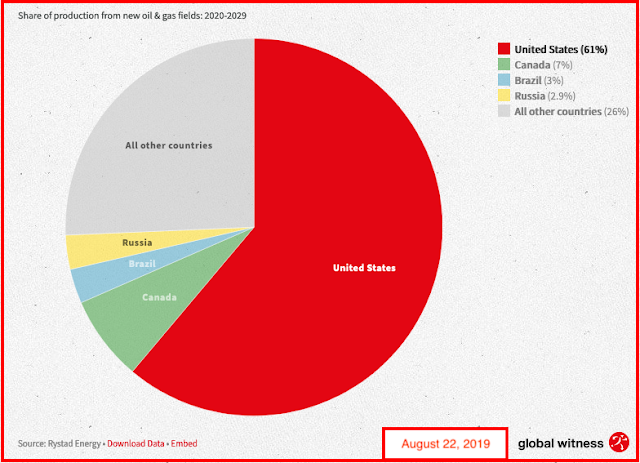 The big question is when did the movers and shakers in the oil industry know this? When did Saudi Arabia know this?