Before we get to the "main story," here's the weekly natural gas story and gasoline demand data:

Natural gas fill (a dynamic link): 63. In the East Region, stocks were 14 Bcf below the 5-year average following net injections of 33 Bcf.

Gasoline demand (a dynamic link): significant upturn, consistent with historical trends; most recent reporting period, 9.343 million bbls vs 9.157 million bbls one week early and 8.867 million bbls one year earlier. The addiction to crude oil is back, driven by low-priced gasoline.

Now back to the main story.

If there's any doubt in anyone's mind that we are witnessing a North American energy revolution, all one has to do is look at this graphic, and look that our propane exports to even Russia are increasing significantly: 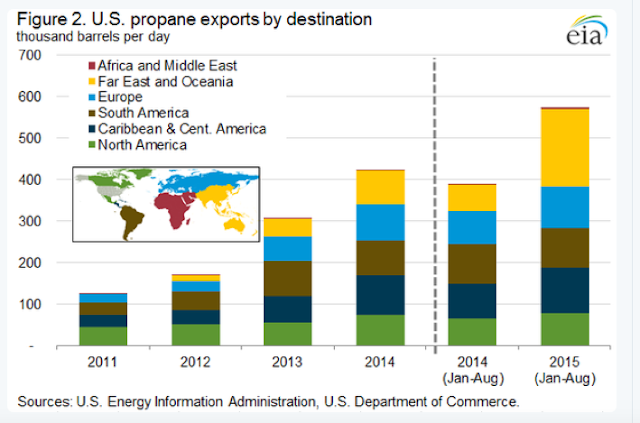 But look at what is going on in the far east.

Speaking of big stories, this is perhaps the saddest story of the week. This is pathetic. This is criminal. This is beyond belief. Should the NEA be brought up on RICO charges? The only way one gets to 96% failure in education is through a concerted, conspiratorial effort. CNS is reporting (becasue mainstream media won't): in the Detroit Public Shool system, nearly every student fails grade-level reading, math:

Only 4 percent of Detroit public school eighth graders are proficient or better in math and only 7 percent in reading. This is despite the fact that in the 2011-2012 school year—the latest for which the Department of Education has reported the financial data—the Detroit public schools had “total expenditures” of $18,361 per student and “current expenditures” of $13,330 per student.

State expenditure per student (most recent data from 2011 - 2012):
I'm not sure if "free college education" is where our attention needs to be in the 2016 presidential race.

I am now re-reading Edmund Wilson's Memoirs of Hecate County. I am finally ready to read this book. I've tried reading it twice before, giving up both times.

The first story was "The Man Who Shot Snapping Turtles." Very, very creepy and done the right way, it would be an incredibly good Halloween story.

The second story was a very long short story, "Ellen Terhune." It was a "back to the future story," every bit as good as any Stephen King novel. It was perhaps better, being told in 40 pages vs a 400-page Stephen King ghost story.

The stories are clearly based on personalities Edmund Wilson knew.

Words I've added to the list of works for the oldest granddaughter to add to her list of words to learn (for all I know, she already knows some of these) (page number in parentheses: