Over at "Big Stories," I have a page devoted to "Europe At A Tipping Point." Although there are political and economic updates at the link, the page is supposed to highlight Europe's energy future. Today, RBN Energy begins a great series on Europe's [probable] need for US natural gas.

I can't recall if I posted this link, the demise of the nascent natural gas industry in Poland. This was perhaps the most recent article, May 21, 2013, and the most comprehensive -- from Bloomberg:

Poland’s shale gas boom is threatened even before it gets started after some wells failed and the government sought to increase taxes on profits.

Of 39 wells planned for 2013, just two were drilled by May, Environment Ministry data show. The government plans to require that explorers take a state-run company as a production partner. It has also proposed raising taxes to almost 80 percent of profit, according to Ernst & Young estimates. The measures, announced in October, haven’t become law.

“What’s been done here is what Poles call dividing up the bear hide before you’ve shot the bear,” said Tom Maj, who led the Polish operations of Talisman Energy Inc., the Canadian explorer that pulled out of Poland earlier this month. “This has been hugely damaging to the shale gas project as evidenced by the negligible number of wells of the past few months.”

Prospectors had come from the U.S. and Canada to drill what was billed as Europe’s richest shale-gas deposits. The dream for Prime Minister Donald Tusk’s government was to find domestic natural gas through an estimated $4.5 billion in exploration projects undertaken by explorers such as Chevron Corp. and Canada’s Nexen Inc. At stake is a strategic goal to cut dependency on imports from OAO Gazprom, the Russian supplier of about two-thirds of the fuel to Poland.

While many explorers including Chevron remain and say they expect their projects to run for years, the disappointment of some of the earliest entrants has caused at least three to pack their bags.

I assume most readers (over age 55) are familiar with "Hints From Heloise." I was not a great fan, but I read her columns once in awhile.

Really, really simple. I placed a large yellow manilla envelope (8.5 x 11 inches) in between the front seats and kept registration, insurance, and copies of maintenance inside. On the outside of the envelope, on the front side, I kept track of mileage and maintenance with a black Sharpie; on the reverse, I kept track of warranties (new batteries, lifetime alignments, etc).

In addition to maintenance, the manila envelope is perfect when renewals come up. I just carry the entire package into DMV with me, knowing that I have everything (usually I renew by mail, but once in awhile I do it in person for various reasons).

When I get pulled over by the local police (twice in the last 45 years, warnings both times), I have everything the officer wants at my fingertips.

It may be the smartest thing I ever did. When driving down the road, if I start thinking about what might be needed, I simply pull out the envelope and read the maintenance log on the outside. In addition, taking the automobile in for oil changes at difference places across the country, I always know what I need (and what I don't need).

When the envelope gets too thick for any more paperwork, it's time for a new car.

The second thing I'm pretty proud of is our recycle bin for art work. It started with our second granddaughter who is very, very clever. She makes all kinds of art projects out of plastic, cardboard, metal, glass that might otherwise be thrown away. We keep a huge bin of this stuff in the utility room.

Today, I see, our youngest granddaughter is finding hidden treasure in the bin. 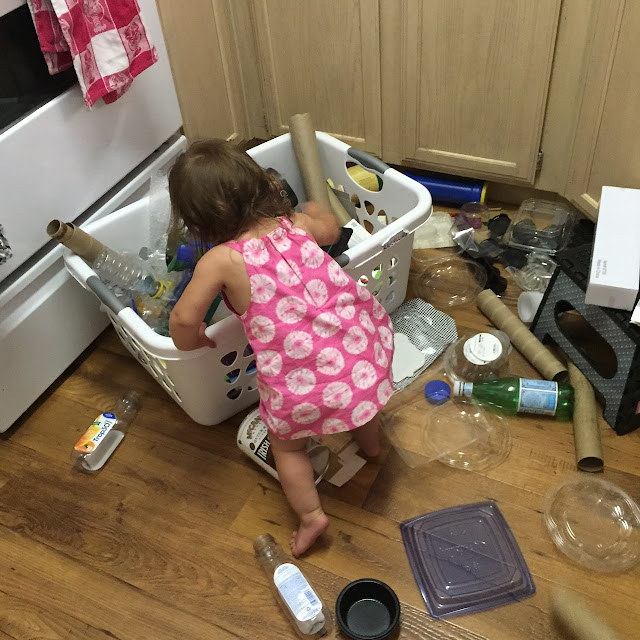 [By the way, I generally have a rule: infants and toddlers NOT allowed in the kitchen, ever, not even if held. Too many accidents waiting to happen. But in a one-bedroom, 761-square-foot apartment, we occasionally make exceptions.]
Posted by Bruce Oksol at 11:02 AM