From the beginning, I said that Saudi Arabia DID NOT increase their production in March / April to extent reported by the mainstream press. There was no way in the world they could increase production that much, that quickly, and get it on tankers that quickly.

They simply emptied their on-shore storage. 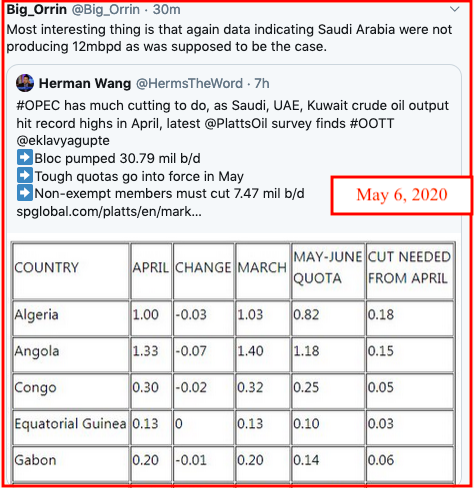 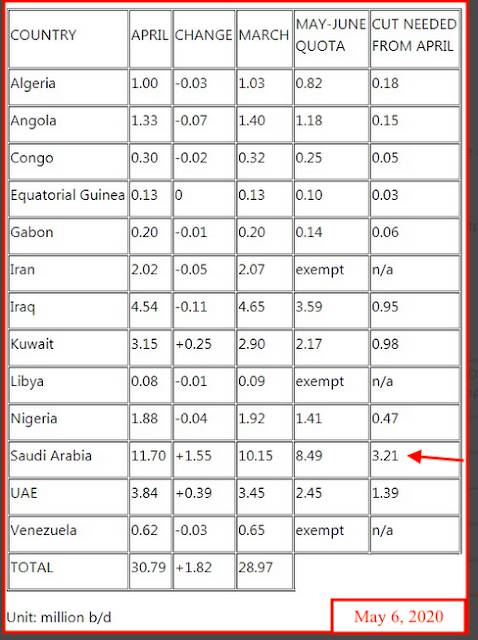 Some say vitamin D is protective against Wuhan flu.

So, along with tonic water with quinine to prevent malaria, I am now biking at least two hours midday every day. Woo-hoo!


Midday, especially during summer, is the best time to get sunlight.

At noon, the sun is at its highest point, and its UVB rays are most intense. That means you need less time in the sun to make sufficient vitamin D.

Many studies also show that the body is most efficient at making vitamin D at noon.

For example, in the UK, 13 minutes of midday sunlight exposure during summer three times per week is enough to maintain healthy levels among Caucasian adults.

Another study found that 30 minutes of midday summer sun exposure in Oslo, Norway was equivalent to consuming 10,000–20,000 IU of vitamin D.

Not only is getting vitamin D around midday more efficient, but it might also be safer than getting sun later in the day. One study found that afternoon sun exposure may increase the risk of dangerous skin cancers.


In the winter, it’s impossible to produce vitamin D from the sun if you live north of Atlanta because the sun never gets high enough in the sky for its ultraviolet B rays to penetrate the atmosphere. But summer is a great time to stock up on the nutrient. When the sun’s UV-B rays hit the skin, a reaction takes place that enables skin cells to manufacture vitamin D.

If you’re fair skinned, experts say going outside for 10 minutes in the midday sun—in shorts and a tank top with no sunscreen—will give you enough radiation to produce about 10,000 international units of the vitamin. Dark-skinned individuals and the elderly also produce less vitamin D, and many folks don’t get enough of the nutrient from dietary sources like fatty fish and fortified milk.

The government’s dietary recommendations are 200 IUs a day up to age 50, 400 IUs to age 70, and 600 IUs over 70. But many experts believe that these recommendations are far too low to maintain healthful vitamin D levels. They advocate for supplementation in the winter of about 2,000 IUs per day and a dose of daily sunshine in the summer.

The sunshine vitamin may protect against a host of diseases, including osteoporosis, heart disease, and cancers of the breast, prostate, and colon. What’s more, sunlight has other hidden benefits—like protecting against depression, insomnia, and an overactive immune system.


Essentially the "Ribeye" and "Rib Steak" are the same. Except the Ribeye is boneless and the Rib Steak includes the rib bone and is often called a "Bone-In Rib Eye Steak". Regardless of which steak you choose, when you take that first bite, you'll know you chose one of the best cuts of steak particularly if it's certified USDA Prime Beef which is the ultimate in taste and tenderness.

Rib Portion of Beef: This fine cut of beef is located at the top of the rib primal portion of the beef and generally comes from the section of beef spanning from ribs six through twelve. Yes, you guessed it. Rib steaks are the same as Prime Rib. When combined as a multiple Rib Roast Section and roasted, it is Prime Rib. When each bone section is sliced and then grilled, ti becomes a bone-in rib steak.

It is interesting to note that rib steaks are often referred to as different names. In Australia, when the bone is removed, it is often called a "Scotch Filet." In America the rib eye is sometimes called a "Delmonico."


NBCUniversal's upcoming streaming service, Peacock, will be available on Apple devices that include the iPhone, iPad, iPod touch, Mac, and Apple TV when it launches on July 15, 2020.

Peacock will be fully integrated into the ‌Apple TV‌ app, and it will be available in the Watch Now section. Peacock content will be tracked by Apple's Up Next feature, and customers will be able to use Siri to search for Peacock shows and movies.

The new streaming service will have a free tier that offers 7,500 hours of movies, shows, and live programming like sports, news, reality, and late night shows.

There will also be a Peacock Premium tier available for $4.99 per month with over 15,000 hours of content.

The $4.99 per month price point includes ads, but an ad-free experience is available for an additional $5 per month (another $10/month for another streaming service). Apple customers will be able to sign up for Peacock Free or upgrade to premium using the Peacock app on ‌iPhone‌, ‌iPad‌, iPod Touch, and ‌Apple TV‌.