UND lost to Utah. But an incredibly great game. Only watched the first half.

Covid is so over: Jack Trice Stadium, third largest stadium in Big 12 Conference with capacity of 61,500. Stands jam-packed. No masks anywhere. Of course, everyone is vaxxed.

Olivia: in addition to everything else she does, including playing on three different soccer teams (one high school varsity team; two FC Dallas "club" teams), she applied for and was accepted as a referee for city recreation games for players under then age of twelve. She is paid $24 / hour. She says that beats fast food where her friends work which includes cleaning rest rooms. She does not have to clean rest rooms as par to her refereeing. [Note: Olivia is our fifteen-year-old "middle" granddaughter.] 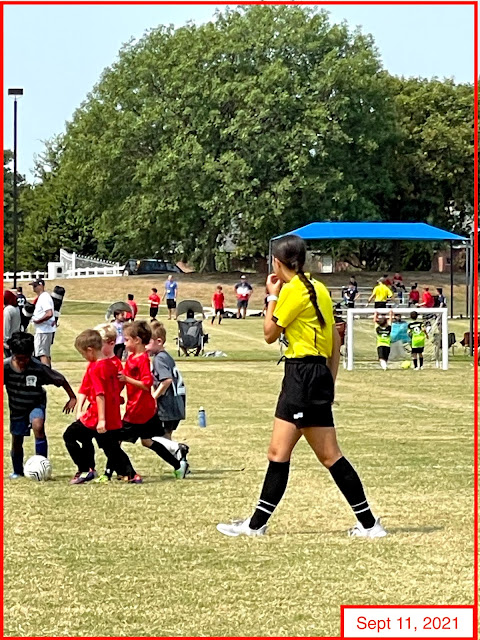 9-11: Resident Biden celebrates the 20th anniversary with taped message on success of the Afghanistan mission.

Male infertility: not a known side-effect of ivermectin, according to US health officials. Well, good. Glad we got that one cleared up. Link here. Not that I was worried, but could you imagine, not only does ivermectin kill worms and Covid-19; it could have been the first male contraception pill, a spermicide. It would been a miracle drug. Especially if it was also shown to lower cholesterol.

India: August gasoline demand holds above pre-Covid level. Link to ArgusMedia. This is not trivial.

"Over the next 10 years, our business is set to generate about $15 billion of free cash flow(1) at $55 per barrel WTI flat oil pricing and would generate about $21 billion at $65 per barrel. Our capital allocation framework sets out our commitment to financial strength, generating superior returns on the capital we invest, returning cash to our shareholders, and driving ESG progress."

Beginning in the fourth quarter of 2021, and until Ovintiv reaches its $3 billion net debt(2) target, the company plans to return 25% of the previous quarter's free cash flow after base dividends to its shareholders through share buybacks and/or variable dividends. The remaining 75% will primarily be allocated to net debt reduction, with a modest amount allocated to small, low-cost property bolt-ons.

In 2022, using commodity price assumptions of $60 per bbl for WTI oil and $3.00 per Mcf for NYMEX natural gas, the Company anticipates that it will deliver approximately $550 million of direct shareholder returns through its $150 million base dividend and an additional $400 million in share buybacks or variable dividends. This cash return would represent a cash yield of more than seven percent.

Once the Company reaches its net debt target of $3 billion, it plans to increase quarterly shareholder returns to at least 50% of the previous quarter's free cash flow after base dividends.

With the huge US Army sandbox closed, we now turn to the US Navy, perhaps the real winner with the end of the Afghanistan war.

Mideast DRONE task force: link here. This is pretty cool if you think about it. A lot of young enlisted men and women "playing" video games for real. LOL.

The DDG 51 Flight III upgrade is centered on the AN/SPY-6(V)1 Air and Missile Defense Radar and incorporates upgrades to the electrical power and cooling capacity plus additional associated changes to provide greatly enhanced warfighting capability to the fleet. The Flight III baseline begins with DDGs 125-126 and will continue with DDG 128 and follow on ships.

The DDG 51 Arleigh Burke-class Guided Missile Destroyer (DDG 51) is a multi-mission guided missile destroyer designed to operate offensively and defensively, independently, or as units of Carrier Strike Groups, Expeditionary Strike Groups, and Surface Action Groups in multi-threat environments that include air, surface and subsurface threats. These ships will respond to Low Intensity Conflict/Coastal and Littoral Offshore Warfare scenarios, as well as open ocean conflict, providing or augmenting power projection, forward presence requirements and escort operations at sea. Flight III is the fourth Flight upgrade in the 30+ year history of the class, building on the proud legacy of Flight I, II and IIA ships before it.

HII is currently constructing four other DDG 51 class ships, including the future Frank E. Petersen Jr. (DDG 121) and Lenah Sutcliffe Higbee (DDG 123) in the Flight IIA configuration, and the future Ted Stevens (DDG 128) and Jeremiah Denton (DDG 129) as Flight III ships. There are a total of 20 DDG 51 class ships under contract at both new construction shipyards.

Jacklyn Harold "Jack" Lucas, 1928 - 2008, white privilege:  an American Marine in WWII who as awarded the Medal of Honor at the age of 17 years as a private first class in the US Marine Corps during the Battle of Iwo Jima. From wiki, again white privilege:

During a close firefight in two trenches between Lucas and three Marines with 11 Japanese soldiers, Lucas saved the lives of the other three Marines from two enemy hand grenades that were thrown into their trench by unhesitatingly placing himself on one grenade, while in the next instant pulling the other grenade under him.

The grenade he covered with his body exploded, and wounded him severely; the other grenade did not explode. He is the youngest Marine and the youngest serviceman in World War II to be awarded the United States' highest military decoration for valor.

He later reenlisted (sic) in the United States Army and reached the rank of captain.

Medal of Honor presented by President Harry S. Truman, another one who benefited from white privilege. The "Later Life" section of the wiki entry is a must read.

If it were not for "bad luck," I'm not sure Jack Lucas would have had any luck at all. What a patriot.