I'm still throttled on my iPhone. Hopefully our cable is back up and running next week, but I am just thankful to have heat and water.

ERCOT/Texas: two days ago I said "this" would be forgotten in two weeks, and in four weeks we would be back to "Covid-19 normal." Well, here it is three days later and ERCOT says it will come out of the "emergency" as of today. That is absolutely amazing; a huge, huge round of applause to the Texans who made this possible. A 100-year "cold event" and here we are; managed to survive and get through it in four or five days. Despite another hard freeze last night, ERCOT said there was enough generation brought back on line to "return to more normal operating conditions." Interestingly enough, the cold spell appears to be lasting about two days longer than originally forecast. Even in the midst of extraordinary forecasting, it looks like "we" can't forecast weather two days in advance, but we can forecast climate change to within 2°C one hundred years from now.

Carpet drying: as I was writing that, I got a knock on the door. The folks are here to dry out the carpet that got a bit of water due to a broken pipe. I had blamed my neighbor for not keeping faucets dripping but it turns out that the pipe broke in the "fire room." Apparently each unit has a "fire room" where "hydrant hook-ups" are located for automatic sprinklers and for the fire department.

Wow, what a coincidence. Going through my e-mail today there was a short comment waiting for moderation before posting. It did not add anything to the discussion, so I was going to delete it. I generally don't post comments that don't add something positive to the blog. Comments can take issue with my posts, or point out where I was wrong, but if it adds to the discussion in a constructive manner it gets posted. This particular comment added nothing to the conversation but I decided to post it anyway. I'm glad I did. It shows the superficiality in the thinking of many folks.

Coincidentally, at the very same time, there was another note from a reader with an attachment to a paper out of Norway regarding the fallacy of CO2 as a cause of climate change. In addition to the science of the carbon cycle, the paper explains the myths that drive our society’s actions.

And then from someone over at CNBC who can actually think outside the box, or at least think for himself. He, too, like me, when it comes to "global warming," gets it.

"Green" backlash in Europe. The Economist. To see this editorial in a most liberal business publication speaks volumes.

Happy one-year anniversary to the peak of the longest bull market in history (for the archives and the question to a future Jeopardy answer: who was President Trump?)

I normally don't post many political cartoons but this one is important on so many levels. When I get access to high-speed internet, I will expand/explain. Without question, President Trump did prove once and for all, that, yes, we could "drill for lower prices." Perhaps his most important legacy was demonstrating that if the government got out of the way, a vaccine could e developed and delivered in less than eight months (?). To the best of my knowledge, this has never happened before. That was simply amazing but because Trump was involved, the scientists who pulled this off will never get the credit they deserve. If there was new science involved (and I don't think there was) then there's always a possibility of a Nobel prize down the road. As far as Rush Limbaugh goes, he was on the scene at exactly the "right" time. Pun intended. Rent-free forever. Forever and ever, amen. 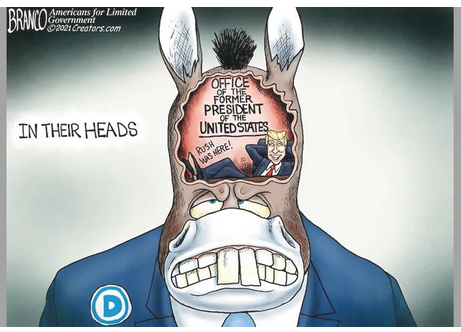 No wells coming off the confidential list until next week.

RBN Energy: sustained Arctic weather exposes . This is exactly what I posted yesterday. It was important that "we" saw the effects of a 100-year polar vortex hit Texas. Smart folks learn from this. Won't happen again. It's a Texas thing.

There’s finally some good news for folks in Texas: it’s gradually getting warmer, and the power outages that left much of the Lone Star State in the cold and dark the past few days should keep winding down. But what are we all to make of what just happened? How could a state blessed with seemingly limitless energy resources of every type — natural gas, coal, wind, and solar among them — end up so short of electricity when it needed power more than ever? It turns out that the electric grid that the vast majority of Texans depend on day in, day out is designed to perform very well almost all the time, but is susceptible to a rapid unraveling when an unfortunate combination of events hit. Today, we continue our review of how this week’s extraordinarily low temperatures have been impacting energy markets — and many of us.

Over time, Texans have pretty much seen it all, weatherwise. Scary thunderstorms. Baseball-size hail. Hurricanes and their attendant flooding. Tornadoes too — plenty of them. Snow and ice storms aren’t out of the question either, nor are sub-freezing temperatures. But no one alive today has seen anything like what many of us have experienced the past few days. Worse yet, the polar vortex of February 2021 wasn’t a short-term thing — it’s lingered way too long, and it’s had profound effects both on energy markets and the people who have lived through it all.