The Banks oil field is one of the most active fields right now (slump in crude oil prices continues); note all the permits in 2015 so far (at the link).

Regular readers know the historical typical IP and production profiles of CLR wells. This is what CLR is now doing in the Banks, a huge difference for CLR compared to a couple of years ago:

This was the letter of acceptance we received while I was with the USAF stationed in England back in the 1980's. This was the official letter of acceptance for our 5-year-old daughter, your aunt Laura, to enter kindergarten. This was not a private school; this was a local community kindergarten open to all living in the community. One would have thought she had just been awarded a Rhodes Scholarship. 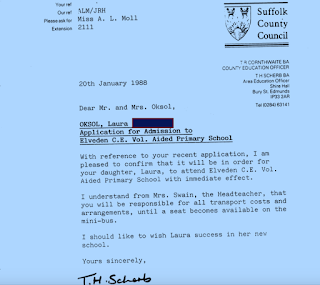