A better graphic -- A huge thank you to a reader; see comments. Now, why couldn't the USGS have done this in the first place? The link: http://i.imgur.com/pdRjCZc.jpg 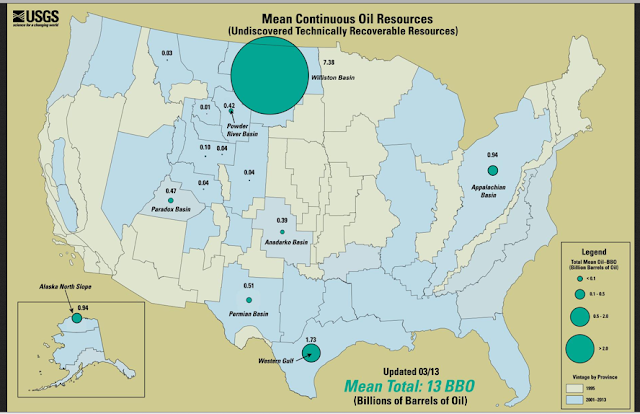 This post refers to the USGS PowerPoint presentation for the 2013 Assessment of the Bakken/Three Forks.

At slide 17, the USGS provides a graphic of the relative size of the various basins of continuous oil reservoirs, such as the Bakken, in the United States, to include Alaska. If one is trying to downplay the size of the Bakken, this is pretty successful.

Each basin/locality has a green "dot" varying in size based on the size of the reservoir. The USGS uses four dots to represent four "sizes":
That was fine when the largest continuous reservoir, the Bakken, was estimated to be 3.6 billion barrels back in 2008. But with the new estimate, the graphic needs to be updated.

Take a look at the graphic (slide 17 at the link). There is not a whole lot of difference in the size of the green "dots" for the Permian, the Western Gulf, and the Williston Basin. In fact, a newbie glancing quickly at this one slide would not be all that impressed with how much bigger the Williston Basin is compared to the Permian or the Western Gulf based on the graphic or the size of the dots.

But then look at the numbers:
The Williston Basin, at 7.38 is more than 4x greater than the Western Gulf (Eagle Ford). And then, get this: the Williston Basin's continuous oil reservoir is almost 15 times larger than the Permian Basin (Midland-Odessa).  The "green dot" overlying North Dakota should be twice as big as it is.

Having said all that: my hunch is that the estimate for the Western Gulf (Eagle Ford) continuous reservoir is significantly underestimated, and will be revised upward in the next assessment.
Posted by Bruce Oksol at 2:18 AM