Port of North Dakota -- Looking For An Update


Hegg Bakken Report: Tell us about the port of North Dakota. Why is that important to Minot?
Curt Zimbelman, Minot Mayor: Well, the port of North Dakota is, it could be, and will be, someday, one of the finest things that Minot can bring to the table. Minot, as you know, may or may not know, Minot is a main stop between Chicago, and the west coast for the BNSF, and we have two different rails that cross right in the, two class-one rails actually that, railways that cross right in downtown Minot, and that’s the CP, and the BNSF, so we’re at the perfect location for a huge regional transportation hub, and that’s really getting off the ground now, and especially for intermodal that we don’t really have around this area to move containers, also egg products (sic) that can be moved in containers. It’ll be a great oil hub. So we’ve got about three thousand of available acres out there to run rail in. So it’ll really put us on the map as far as regional transportation hub, I think.

I haven't found a news story on the web to confirm it, but two folks have written to tell me that "the railroad in Minot" is hiring a fair number of new employees, probably related to the Port of North Dakota. Perhaps one of the regional newspapers will provide an update sometime.

A story posted back in August/September suggested that several hundred employees might be hired, but that number could grow significantly in size. 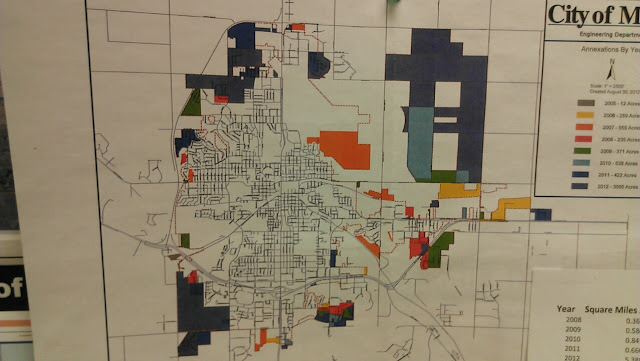 The Port of North Dakota is the large grey area northeast of Minot, about six square miles in size.
Posted by Bruce Oksol at 4:14 PM

Email ThisBlogThis!Share to TwitterShare to FacebookShare to Pinterest
Labels: Port_of_North_Dakota