For various reasons, I don't want to be more specific with regard to this issue.

A reader inherited mineral rights in one of the areas marked with an oval and labeled, A - E.

The other areas, numerically identified, are there for comparison. 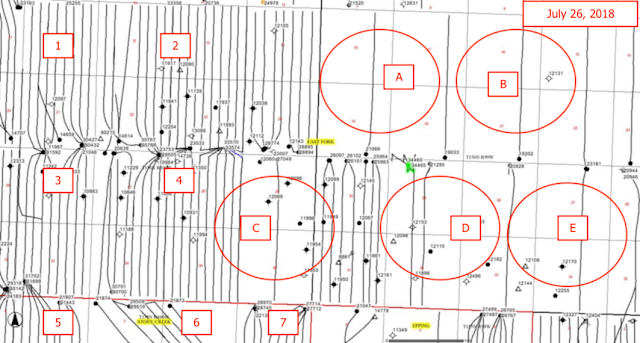 The reader wanted to know whether:
My thoughts:
Every individual's situation is different.

Reply anonymously in the comment section or directly to my e-mail address which can be found at the sidebar at the right.

Disclaimer: one has to assume that all readers who respond are simply providing an opinion and cannot be held "liable" for their advice. I don't see this as anyone, including me, giving any advice, simply giving an opinion.

Just minutes ago it was reported that Katie won the 200-meter freestyle.

200-meter freestyle (note this was from the linked AP site -- completely messed up):
Obviously the linked AP story has errors; waiting for corrections. [Wow, the AP story really appears to be "screwed up." See below, from SwimSwam].

Later: it looks like SwimSwam has it correct, regarding the 200-meter freestyle: