The music really seems to fit my mood this morning, and fit the mood for this next story.

We were stationed in Germany for three tours (Bitburg, Bitburg, Rhein-Main). At Bitburg we were just a short drive away from the Mosel River, sort of a Napa wine region -- but much, much better on so many levels.

The WSJ has a feature on the Mosel River / Valley this week. The headline: the wine destination only the pros know. Either that's a fake headline or I'm a wine pro. LOL. 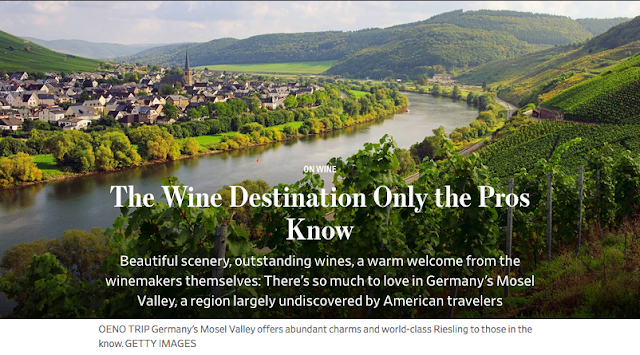 
American wine drinkers don’t visit German wine regions the same way they do those in Italy or France. And yet the Mosel is one of the oldest, most beautiful wine regions in the world, home to small, charming villages with half-timbered houses and spectacular Riesling vineyards.

Some of the vineyards are so steep they’re practically vertical. “You learn to dig in your heels,” said Johannes Selbach, owner of Selbach Oster winery, as we stood at the edge of the vertiginous Zeltinger Sonnenuhr vineyard, above the town of Zeltingen. Mr. Selbach lives there, in a generations-old waterfront house that’s regularly inundated when the Mosel river floods.

Mr. Selbach produces some of the region’s greatest Rieslings, and his family is one of several who have been growing grapes in the Mosel for hundreds of years. Unlike Tuscany or Bordeaux or, increasingly, Burgundy, the Mosel is almost entirely populated by small, family-owned wineries, operated by the producers themselves.

While in Germany we went on one or two wine tastings as a group arranged by the fighter squadron to which I was assigned.

The wine tasting consisted of a full German meal with multiple wines paired with each course. The dinner / tasting started about 4:00 p.m. and went to about 2:00 a.m. The vintners were always prepared to go longer, but Americans, I guess, have difficulty partying all night long.

Every wine was excellent, but the dessert wines -- Eisweins -- were priceless. I could seldom afford to buy an Eiswein.

I finished Max Boot's The Road Not Taken.

I wear my emotions on my sleeves, as they say. My eyes teared up as I came to the end of the book.

I will leave it at that. I guess I mentioned that last night. I had forgotten.
Posted by Bruce Oksol at 9:53 AM