Four Consecutive Years Of Declining Conventional Oil Volumes Which Has Never Happened Before -- IHS -- May 23, 2016

Oil & Gas Journal is reporting that the conventional discoveries of oil and gas outside North America have fallen to the lowest level since 1952. Some data points: 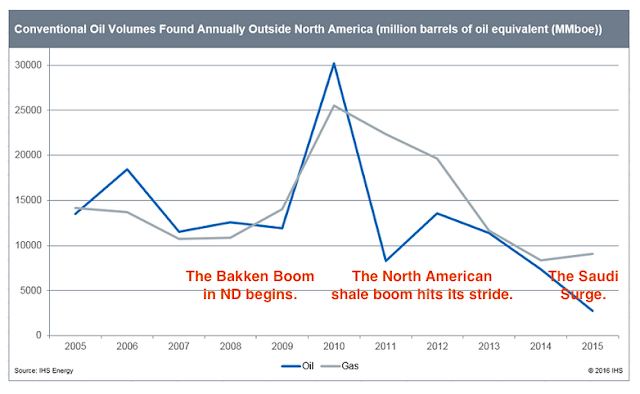 
"We cannot ever produce enough oil, in my opinion, to satisfy global demand five or 10 years out. We have to start using natural gas and more biofuels as a source of transportation fuel," former Shell Oil CEO John Hofmeister said in an interview with CNBC.

On Thursday, the American Petroleum Institute reported petroleum deliveries rose by 3.6 percent from a year ago to 19.7 million barrels a day, making it the highest April deliveries in eight years.

This is not an investment site. Do not make any investment, financial, travel, work, or relationship decisions based on what you read here, but as for me, I'm looking around.
Posted by Bruce Oksol at 9:06 PM