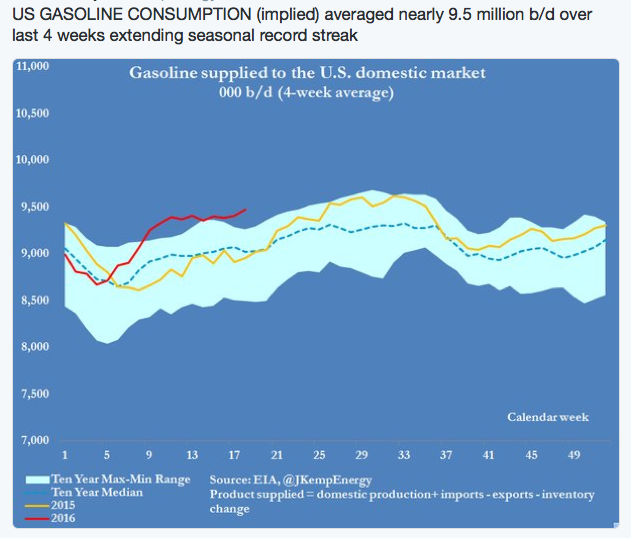 For the archives: Bloomberg is suggesting the oil price rally might be for real this year.


While U.S. supply was a big driver last year, it's time to look at supply outside of America. The analysts note that U.S. production peaked last April, and supply outside the country is now significantly impacted by low prices. This is important because it's much harder for other countries to get drills back online than in the U.S. Due to the nature of shale, once oil prices start to rise, U.S. producers can quickly ramp up production while other countries can't.

"[T]he list of countries with declining supplies has grown rapidly: Brazil, Mexico, Colombia, China, Azerbaijan and others. Total non-OPEC oil production (excluding the U.S.) fell year over year in February and March (-105,000 barrels/day and -142,000 barrels/day, respectively) after rising for the prior 33 months," Kleinman and his team wrote. "This dynamic is particularly important, because unlike shale, these supply declines are much harder to reverse in the short- or even medium-term."

To be sure, the team at Citigroup doesn't expect a massive rebound in oil prices either, due to risks such as Saudi Arabia's continued unwillingness to budge on production: "Saudis are not looking to reduce oil production under the current market conditions and if anything are likelier to be putting more barrels on the market. This is probably the biggest bear risk to oil markets right now."

Email ThisBlogThis!Share to TwitterShare to FacebookShare to Pinterest
Labels: SaudiSurge